Hail to the Chief!

Last Thursday the fifth annual Cosmo Couture fashion show took place before a full house at Artisphere in Rosslyn. Produced by the Washington Metro Chapter of the International Interior Design Association, it showcased the fashion design talents of local architecture and interior design firms, who teamed up with manufacturing partners to create imaginative garments made from various interior building materials based on a given theme. This year, models from 25 area firms walked the runway in unique couture creations made from tile, carpet, wood, vinyl, glass, rubber, fabric and light fixtures inspired by one of the 44 U.S. presidents. 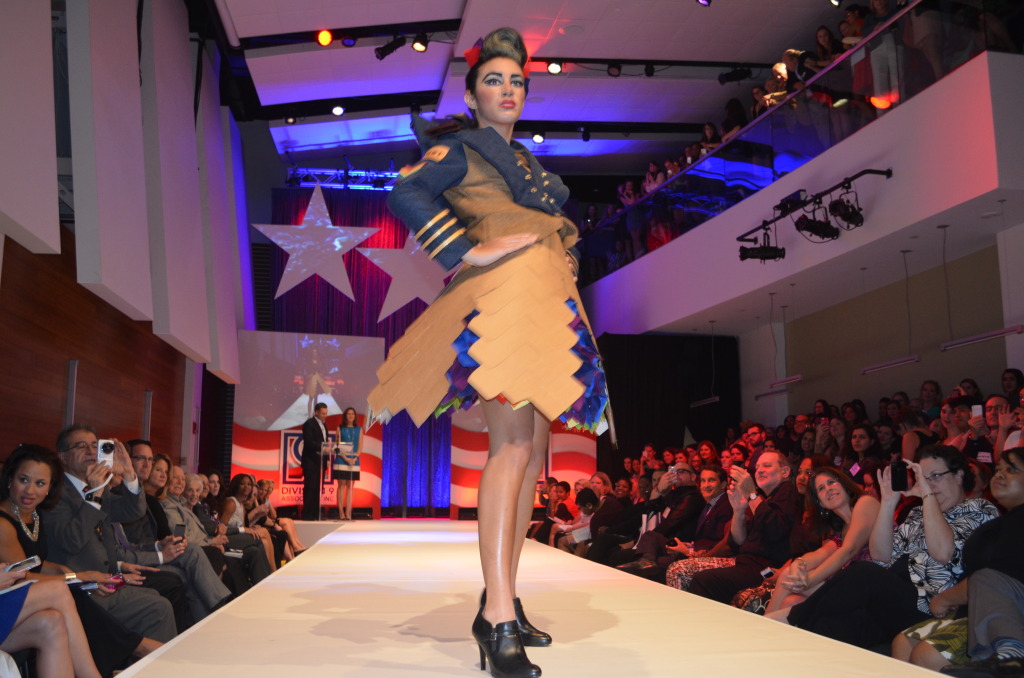 Each team drew inspiration from the era of the president whose name they’d randomly drawn from a hat during the Cosmo Couture kick-off party. Teams explored the prevailing political and social issues, fashion trends and global events in their designs. Their sponsoring manufacturing partners provided the materials, which had to comprise at least 85 percent of materials used in the final runway-ready ensemble. The teams competed for six awards: most creative, best runway performance, most unique material, best interpretation of theme, audience favorite and haute couture.

As event chair Pedro Nunez explained, this year’s theme was “a tribute to the image that most exemplifies Washington, D.C. — the presidents.” Tumultuous historical events, elegant bygone fashions and of course, shocking presidential scandals all challenged the design teams to reach new heights of creativity. 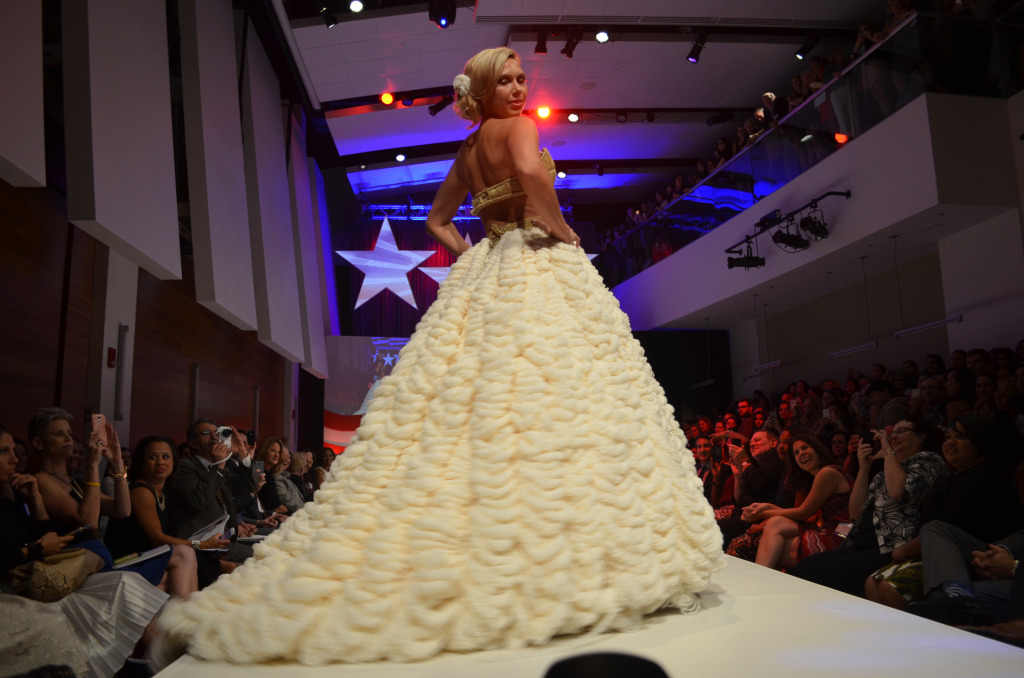 The audience favorite, WDG architects partnering with PatCraft Carpet, dazzled the audience with a daring ensemble inspired by President James Madison. The voluminous skirt constructed with carpet yarn represented the billowing smoke from the burning of Washington during the war of 1812. 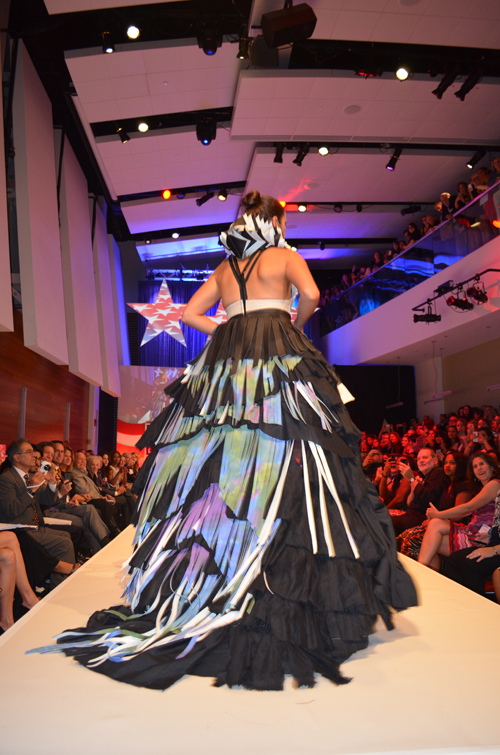 The colors of the aurora borealis evokes the purchase of Alaska during Andrew Johnson’s presidency (Photo: Scott Steinke)

VOA Associates used conduit from furniture manufacturer Bernhardt to create the 1860s hoop skirt silhouette in vogue during President Andrew Johnson’s term. This striking form, contrasted with the colorful train evoking the aurora borealis, a reference to the purchase of Alaska, won the most unique material award. 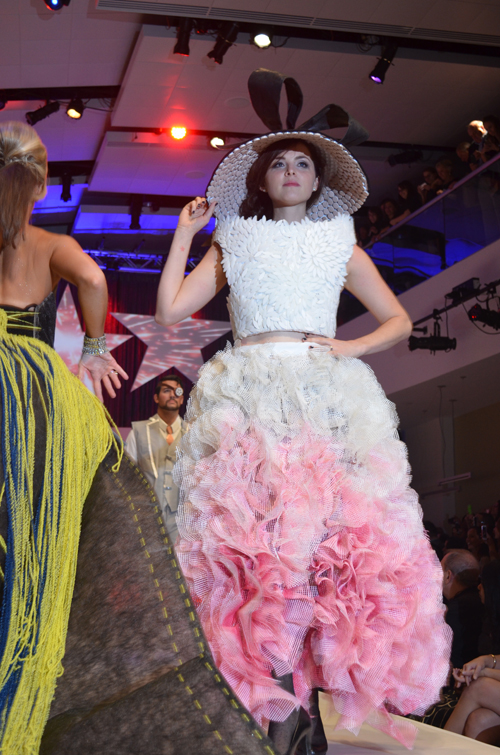 CORE took home the coveted haute couture award with an exquisite gown crafted with glass tile, Schluter strips, waterproofing membrane and mesh backing that was reminiscent of early 20th century fashion. The delicate pink and white meshing formed cherry blossoms, alluding to the 1912 purchase of the cherry trees that now encircle the Tidal Basin from Japan. 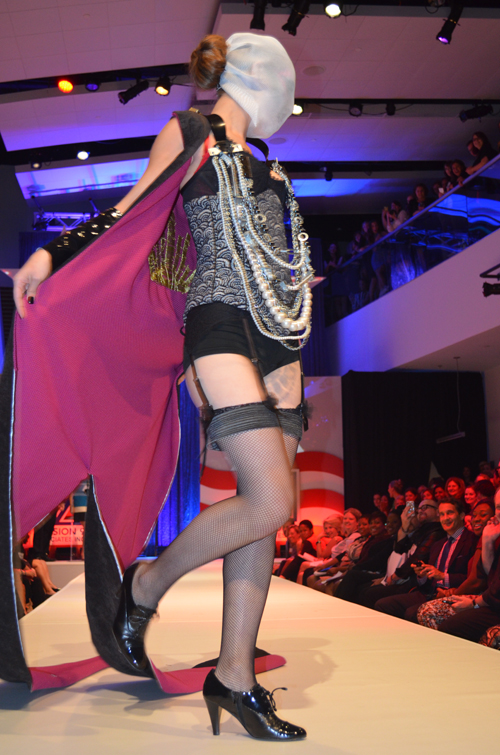 Wingate Hughes’ rather “minimalist” interpretation of Warren Harding’s scandal-ridden administration resulted in a conspicuous absence of clothing.  The few materials I could discern were furnished by HBF. This paucity of fabric allowed the unencumbered model to perform energetic gyrations that earned the team best runway performance. 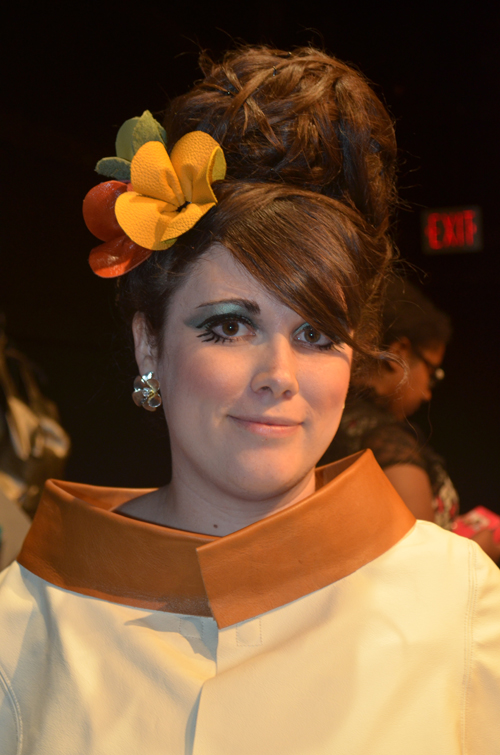 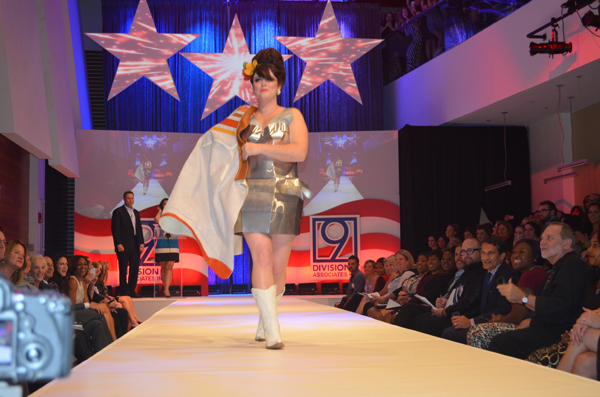 Best interpretation of theme went to Fox Architects, whose sleek space age mini-dress and cape that recalls the one worn by Lady Bird Johnson over her inaugural gown, exemplified the late 1960s fashion of Lyndon B. Johnson’s presidency. The hair and makeup was also spot-on. 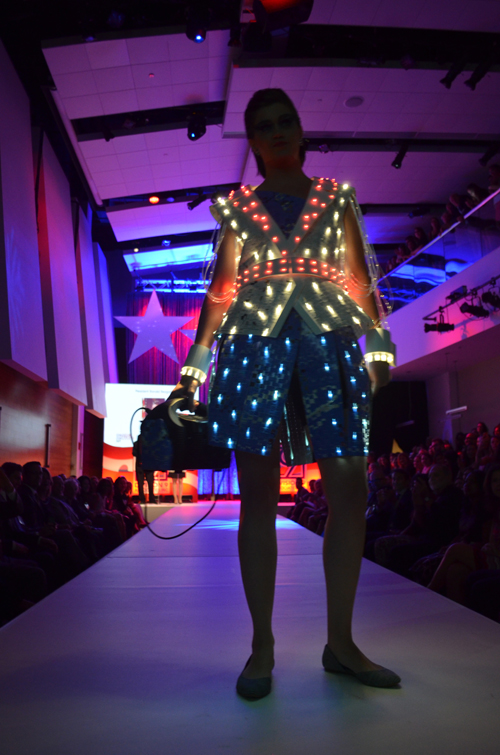 Interplan, in collaboration  with Federated Lighting, won most creative with a glowing LED light-adorned 1980s-style “power” suit based on the Reagan era. Personally, I found Design Collective’s Clinton-era “don’t ask, don’t tell” inspired outfit to be clever and well-crafted.