Finding Love in the District

If you don’t have a date for Valentine’s Day, do not worry. The love of your life could be just around the corner. According to Nerdwallet, D.C. is one of the best cities for singles, coming in second place behind Boston. Standing at a whopping 73.27 percent, Washington, D.C. has the fourth-highest percentage of unmarried residents. The national average for unmarried singles living in a city is 52 percent. Nerdwallet calculated their findings using the following factors: availability of singles, ease of meeting people and affordability. 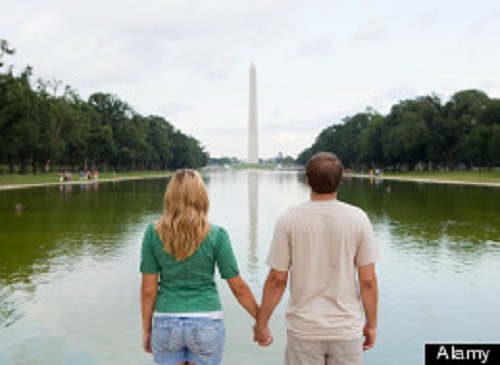 D.C. is one of the best places to be single. (Photo: Huffington Post)

Ease of meeting people was determined by the number of bars and restaurants per 1,000 residents, which was found to be 3.52 bars/restaurants per 1,000 residents. Walk scores were taken into account in this as well. Washington, D.C. has a walk score of 74.1, which Nerdwallet determined would make it easier for dates to meet up without needing a car.

Affordability was determined by the price of a “cheap date,” which involves two movie tickets, a 12-inch Pizza Hut pie and one 1.5 liter bottle of Livingston Cellars, Gallo Chablis or Chenin Blanc wine. In the District, this “cheap date” will cost you $37.04 coming in pretty close to New York City’s $38.69. The affordability category also included unemployment rates as it assumed that employed singles would make for a more affordable date. The Washington, D.C. area’s unemployment rate remains at a steady 4.9 percent, which is below the nation’s 6.7 percent unemployment rate.

Another city in the area also made the top 10 list of best cities for singles. Baltimore hit the chart in the number five slot.  With 73.78 percent of Baltimore’s population being single and 3.37 bars/restaurants per 1,000 residents available, Baltimore is another great place to go searching for dates. To read the full listing and results, click here.