This was an interesting year in fashion and celebrity style. There were cringe-worthy moments (ahem, talking about you, Miley Cyrus) and stunning ensembles (a great year for Oscar gowns), surprising haircuts and a Royal Baby to dress up for. In no particular order, we give you the most memorable style moments of 2013. 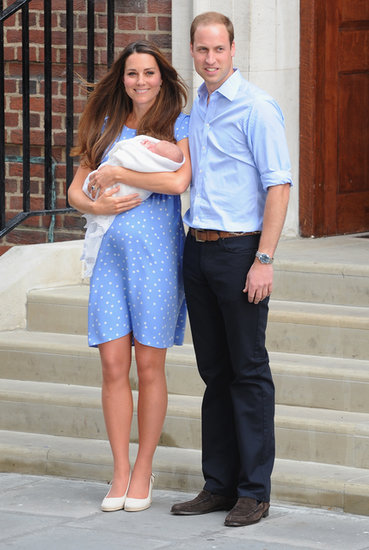 The Duchess of Cambridge wore a pale blue polka dot Jenny Packham dress for her first post-baby appearance on the steps of St. Mary’s Hospital in London. All the world cooed at the adorable couple and scrambled to find knockoffs of the sweet dress.

Miley Cyrus wore almost nothing and dominated the year’s trends

This is the year that made Miley Cyrus a household name, due in large part to her onstage antics and daring ensembles. Mock her if you will, but you can’t deny that Miley was a trendsetter this year. Leather, crop tops, bejeweled sweatshirts, ’90s fashion; all were seen on the former Disney star gone rogue.

Anne Hathaway bombed at the Oscars

Anne Hathaway got a lot of flack for the pale pink Prada gown she chose for this year’s Oscars. Even winning the award for Best Supporting Actress didn’t help with the reception of her outfit. The gown received the most negative reviews and Tweets of any Oscar ensemble. Anne later admitted the gown was a poor choice, and she should have gone with Valentino.

Jennifer Lawrence stunned at the Oscars

Jennifer Lawrence, on the other hand, could do no wrong in the eyes of the public this year. She accepted the award for Best Actress in a beautiful mermaid-style Dior Haute Couture gown.

Michelle Obama got her bangs just in time for the inaugural balls. Bangs wouldn’t normally be a big deal, but on The First Lady, even the smallest change is a major style statement.

Jennifer Lawrence got a pixie cut

Since she was really the breakout star of the year, it’s appropriate that we list Jennifer Lawrence twice. And this haircut really did blow up the Internet. It paired well with her chic ensembles as the face of Dior. And JLaw wasn’t the only celeb to sport a pixie cut in 2013. Anne Hathaway, Michelle Williams and others jumped on board.

Have I missed anything big? What will you remember in fashion from 2013? Let me know in the comments!

Erica Moody is a Louisiana-born writer who's called D.C. home since 2010. In addition to fashion writing, she covers social events, edits The Citron Review literary journal and is working on a novel. Erica holds an MFA in creative writing from Antioch University.

Erica Moody is a Louisiana-born writer who's called D.C. home since 2010. In addition to fashion writing, she covers social events, edits The Citron Review literary journal and is working on a novel. Erica holds an MFA in creative writing from Antioch University.
More posts by the Author »