richard
Off
Clyde's, D.C. City Council, georgetown, How We Do Business

In 1963, the first Clyde’s opened its doors in Georgetown. Fifty years and 14 restaurants later, Clyde’s has established itself as a beloved D.C. area mainstay, iconic for its oak bars and great American food.

To commemorate Clyde’s passage into half-century status, there have been a number of happenings lately. On Aug. 12, the D.C. City Council officially proclaimed the day “Clyde’s of Georgetown Day” and the restaurant offered patrons free breakfast and featured throwback menu items popular from the ’60s and ’70s like London broil, filet bearnaise, and beer battered shrimp. In further celebration, Clyde’s of Georgetown received the 2013 Honorary Milestone Award at the Restaurant Association of Metropolitan Washington’s annual RAMMY awards Gala.

How We Do Business 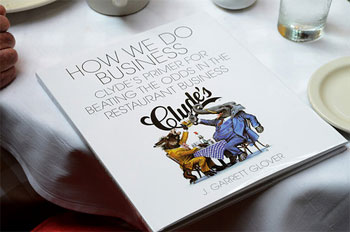 Cataloging Clyde’s legacy of success is the new book How We Do Business, Clyde’s Primer for Beating the Odds in the Restaurant Business by J. Garrett Glover. Clyde’s first corporate operations manager, Glover examines in his book the elements of Clyde’s thriving longevity offering insight and anecdote into a restaurant concept that has never once had to close a location.

Glover posits that Clyde’s flawless track record comes from the execution of late founder Steve Davidson’s starting vision, a belief that it’s more fun to eat in a saloon than drink in a restaurant. Expanding on that mantra, Glover states that Clyde’s enduring success has come from its ability to meets customer needs. “The company thinks first like the customer … not about but like the customer. Second, it thinks like the employee charged with taking care of the customer. And, third, like a business,” said Glover.

Come see what the business is all about at any of Clyde’s 14 locations in D.C., Maryland and Virginia.