Fusion at Its Finest

Roughly translating as give and take, Zengo is featuring a new “Test Kitchen” series from October 2nd- December 31st that  pairs Korean and Mexican cuisines into an artful, exciting blend. Patrons more than wind up on the receiving end of this tasty, karmic exchange.

Have Chopsticks – Will Travel 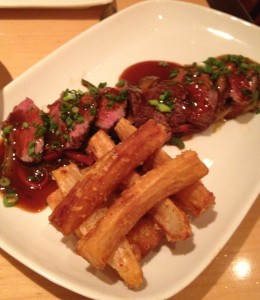 I visited Zengo recently for a three course tour through their new Test Kitchen dishes. The ginger vinaigrette and ample pecans on the Give ‘n Take Salad along with the chipotle zest of the Angry Zengo Roll sushi completely transplanted me so that nary a scrap was left when I finally remembered to take a picture. 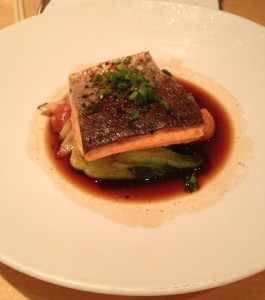 I made sure to have my wits about me when it was time for the Cedar Paper Salmon and Palomilla Lomo Saltado, but even an alert mind couldn’t prepare me for the wonders in store.  The spice and sauce of these two dishes sent the old salivary glands  into a blissed frenzy, making me sort out flavors and influences long after first bite. Not a meal for the passive tastebud, but the hearty Yuka fries and flaky, melt-on-impact salmon were well worth the effort. 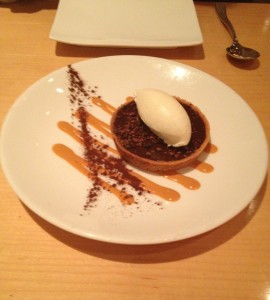 The Mexican Chocolate Tart helped cool down any lingering spices and made a nice finish to a fantastic meal.

Zengo: What are You Waiting For?? 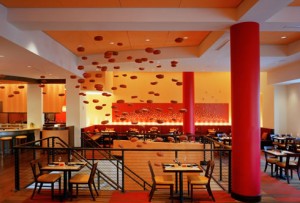 As the old Zen koan asks, “What is the sound of one hand clapping?”

No idea. But Zengo’s Test Kitchen deserves a round of applause and with both hands- if you can manage to put your fork down.

Check out their Korea-Mexico menu items until December 31st at 781 Seventh Street NW, Chinatown, just outside the 7th and H Street exit of the Gallery Place/Chinatown Metro stop.

Richard is a freelance writer who enjoys building a healthy appetite with long runs around the city. When not logging the miles, he can be spotted training the palate at brunches, happy hours and food trucks.
One Comment