Have you ever heard of Peanut Butter Stew? 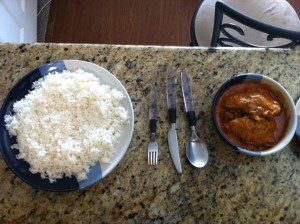 Click here to get a recipe for Maffe Tiga from the film's star.

Not only is it a popular dish in West Africa that is also known as Maffe Tiga, but Peanut Butter Stew is also the inspiration behind a new independent film about a young African woman in search of the recipe for love in L.A.

Grandma always said the way to a man’s heart is through his stomach, so I decided to sit down with the film’s star, Marie Josephine Zoumanigui, to find out the romantic powers behind “Peanut Butter Stew.” 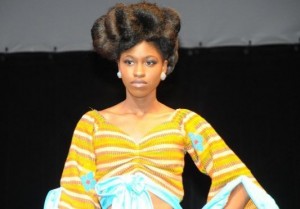 Marie Josephine is a New York City based actress from Guinea, West Africa

Markette: Tell me about the film and what role you played in the production?
Marie: The movie “Maffe Tiga” is a romantic “dramady” about a young African woman who finds that love is the true connection between her heritage and her future.

After struggling to make ends meet and relationship troubles, an unexpected letter from her grandmother reveals that generations of women in her family have faced similar challenges. Rather than giving up, they pass down a secret recipe that draws them closer to each other and to their dreams.

With this movie we were trying to show a bit of our culture , but still allow it to be relatable to everyone, not necessarily just a Guinean person. 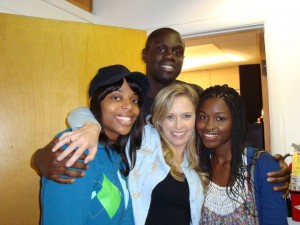 When the film’s direcotr, Mohamed Dione, sent me the script I had no idea that he wanted me to play the lead. Soon after, we started a Kickstarter.com account, which is a really cool website that allows the public to fund creative ideas. We tried to get almost everyone we knew to donate, and it worked. That’s how we got the money to make the film, and so far so good. We are getting lots of great feedback from just the trailer by itself.

We can’t wait for people finally see the whole thing.

Markette: Where can Washingtonians see the movie?
Marie: If we get a distribution deal after the movie makes its rounds at festivals, then that would allow almost everyone to be able to see it. If not, we will make it available online.

Markette: Why name the movie after a dish as unique as Peanut Butter Stew?
Marie: The film is named Maffe Tiga because peanut butter stew is a great tasting, powerful stew from Guinea and if made properly… the world is yours.

Markette: The world, really? All this from a stew?
Marie: Yes, but you’ll have to watch the movie to find out more.

Markette: This is a comedic movie about a single black females’s life in the Big City. Why do you think there aren’t more women of color starring in romantic comedies?
Marie: Yes, my character has a boyfriend and is dealing with the stresses of life that many women deal with, which can also sometimes test relationships.

I think the reason more women of color aren’t starring in romantic comedies is because not too many of those kinds of stories are being written for Black women. And if they are, they are not being made. 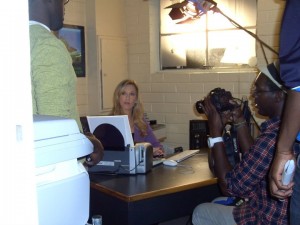 Behind the Scenes of "Maffe Tiga"

I think the movie industry has this thing, that if a film stars a Black woman then her lifestyle and environment should be negative and have intolerable levels of hardship, which is not the case for all. As a Black woman myself, I came to America when I was 8 years old, and I’ve had a pretty normal life — nothing concerning intolerable levels of hardship. It’s coming to a point where I feel in order for us to have the kinds of movies we want to see made, then we have to make them ourselves. And I think that movement has already begun.

Markette: What’s next for the movie?
Marie: The film will be submitted and played at film festivals in early 2012. Check Maffetigafilm.com

Now that you know all about “Maffe Tiga” the movie, check out the recipe for Peanut Butter Stew from the film’s star by clicking here.