Seeing as this is probably the closest I could get to my dream of going to Sundance in Utah, the DC Shorts Film Festival is reasonably priced for a broke college student living in the city. At $13.50 online for nine films compared to the $11.50 I have to pay for a predictable movie at the theater, I couldn’t turn this deal down.

Worried that I was late, I sprinted from Metro Center to E Street Cinema hoping that I did not miss the first flick. Fortunately with two minutes to spare I found a nice cushioned seat with my popcorn in hand, prepared for what was to come.

“Keep it short. Keep it reel” is the tagline of this year’s film festival. With more than 145 films, each showcase is organized to display comedy, drama and animation. Each film ranging from five to 20 minutes has the audience on the edge of their seats waiting to see what would happen in the next minute or two. Every time a movie ended, they would “aww,”  wishing the film could have lasted longer. 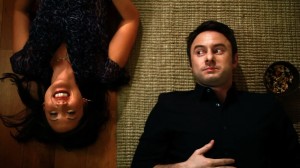 In the short film "Cataplexy," a man with an unusual medical condition is embarrassed to discover the call girl he hired is an old friend.

From September 8 to the 18, viewers flock to downtown DC and several theaters in Virginia to see the work of what they hope to be the next Spielberg. Whether from Brazil, England, or the Washington area, each director that took part in the festival left his or her own mark on their short film as they managed to bring out relatable characters in 20 minutes, which would usually take Hollywood two hours to do.

I recently chose to go to Showcase 9 where the opening movie called Cataplexy, was the most unique film I have ever seen. I instantly fell in love with the awkward chemistry between the two characters and had to hold my stomach from laughing so hard at how this disease was oddly depicted. As the first film, it set the standard for the other eight, which were definitely on the same level by the end of the night.

I plan on heading to more independent films and definitely believe the up and coming directors should be supported for their hard work. Whether you’re roaming around enjoying DC this Sunday afternoon or looking to impress a date, this is definitely an event not to miss.