What would you do if Matt Damon or Gweneth Paltrow gave you the flu?

Well, I might be a total geek and think, “Wow! I can’t believe that I was close enough to a huge movie star to catch a virus from them… cool!”

BUT, the scenario that plays out in Paltrow and Damon’s new movie is anything, but cool.

Germaphobes, beware: the movie Contagion plays into your fears of touching public bathroom door knobs and taking a deep breath after a stranger sneezes on you. (Watch the Contagion movie trailer… only if you’re not OCD about germs!) 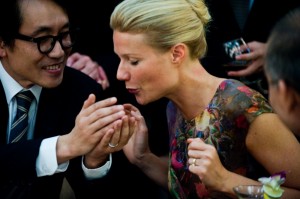 Gweneth Paltrow gets the "mystery flu" in "Contagion."

The film follows the rapid progress of an airborne virus that becomes deadly within days. As the fast-moving virus spreads, the worldwide medical community (including Kate Winslet and Laurence Fishburne who play doctors in the film), races to find a cure and control the panic that spreads faster than the virus itself. At the same time, ordinary people struggle to survive in a society that falls apart amid a mystery illness. 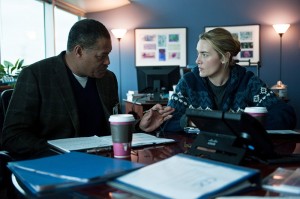 Laurence Fishburne and Kate Winslet play doctors who try to solve the puzzle behind the mystery flu in "Contagion."

More about Contagion (in theaters September 9):

Contagion was filmed in locations around the world, including sites in Hong Kong, Macao, Chicago, Atlanta, San Francisco, London and Geneva.

FREE TICKETS:
For your DC on Heels complimentary tickets to an advance screening of CONTAGION in Washington on Tuesday, Sept. 6 log on to www.gofobo.com/rsvp and input the following code: DCHEELWYMA to download your tickets.
CONTAGION
Free Advance Screening
Tuesday, Sept. 6
7:30 PM
AMC Mazza Gallerie
We only have 40 “admit one” tickets, so hurry and download your FREE MOIVE TICKET now… See you at the movies!
xoxo,
Markette