Just days after the royal wedding, His Royal Highness The Prince of Wales makes a visit to our nation’s capital to tour what is the only urban farm in the District, Common Good City Farm on V Street NW in LeDroit Park. 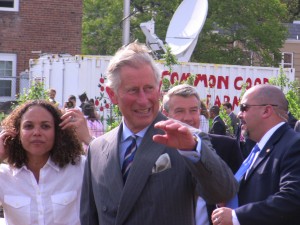 It was 4:30 in the afternoon and blazing hot, but Prince Charles seemed at ease in his dapper suit as he was guided through the farm by Pertula George (to the left of the prince), the executive director of the LeDroit Park not-for-profit organization. 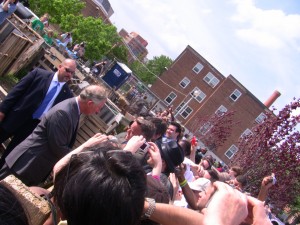 On his tour in the historic neighborhood of Washington that borders Howard University, Prince Charles seemed to relish in the excitement of community residents-turned-royal watchers. The Prince, a long-time supporter of green initiatives and sustainability, also enjoyed taking in the sights of  the budding herbs, fruits and vegetables of the farm (Learn more about the farm here). 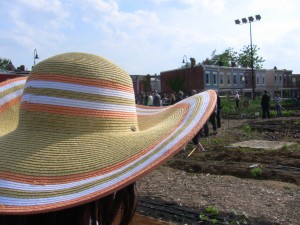 This LeDroit Park resident, who wanted to remain anonymous because she was missing work to grab a glimpse of the prince, wore a big-brimmed hat in honor of the royal visit. 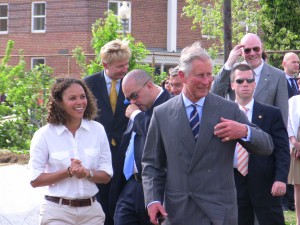 Prince Charles seemed so friendly as he stopped to shake hands with the crowd. He even told one woman that she made his day! 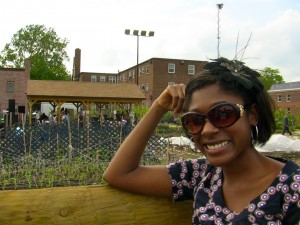 I thought that it was so great that he was telling people in the crowd of how they made his day, when he was actually making our YEAR! I mean, how often do you get to meet a PRINCE? 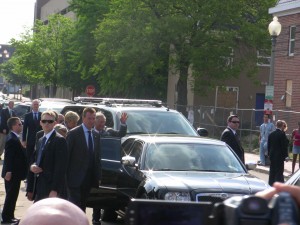 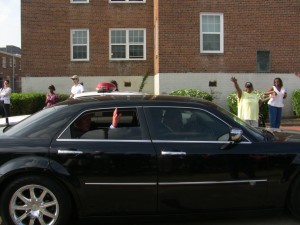 And before we knew it, Prince Charles was whisked away into his Bentley or was it a Chrysler 300???

He was reportedly headed to The British Embassy for a soiree in his honor.