The Road to Love

Travel with Someone You Just Began Dating

One month after my girlfriend and I officially christened our relationship, deep in the throes of the honeymoon stage, we found ourselves contemplating something possibly romantic, possibly unhinged — depending who you asked. I was doing some reporting in Poland, and planned on taking an extra week off to travel south through Croatia and Greece. Though we had yet to spend more than 36 straight hours together, we weren’t too keen on spending on all that time apart, either, and she had some vacation days left on her docket. A trip across the Atlantic, before we had even met each other’s roommates — before we had even said “I love you” — felt like the first act of the most disastrous Judd Apatow movie ever made. But neither of us could resist such a fun, bad idea, and we purchased the airfare on her living room couch. 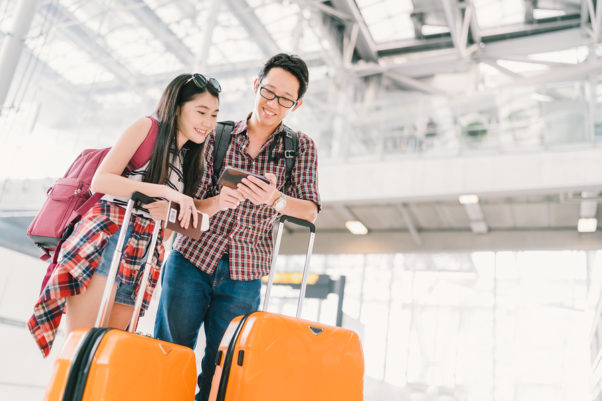 Traveling with someone you just started dating could be full of pitfalls. But, there are a few ways to avoid them.
(Photo: Sushiman/Shutterstock)

It has been nearly a year since that vacation. We are still together. Everyone we told about the impromptu trip was skeptical (there were many strained smiles and versions of “oh… wow!”), but those eight days proved that we could co-exist without self-destructing or flaming out. Rather than cracking the relatively new foundation, this whirlwind trip solidified our feelings — though, there were a few pitfalls that could have wreaked havoc, so below are a few tips on how to avoid them:

Travel during the off-season

A truth of any relationship that is only a few months old: You guys aren’t great communicators yet. That is not your fault; nobody has assembled the full run-down of sensitivities, language tics and off-limit topics after only a handful of weekends hanging out together at fourth date-caliber bars. You don’t even have their birthday memorized yet. The mind-meld takes time. Luckily, we were traveling to Dubrovnik in the dead of winter, which meant that cruise ships weren’t emptying out into the city every hour. We had the chilly city to ourselves, which relieved a lot of the navigation faux pas and crowd anxieties that can quickly zap the life out of any trip.

At the time, though, we didn’t have even a handful of the communication tools we do now to handle high-stress, chaotic travel. There is absolutely a chance we could have found ourselves mired in an apocalyptic argument after, I don’t know, a particularly gnarly $89 Uber ride for starters. So save your summer in Rome until after you have had a few more reps, when you are both more accustomed to how you respond to pressure.

This sounds a little morbid, but we booked separate flights home at the end of our trip. To be honest, the reasons we did that had more to do with schedule demands than any apocalyptic visions for how the trip might have gone, but… I would be lying if I said I didn’t take a bit of solace in knowing that if things went real bad overseas, at the very least we weren’t going to have to spend nine hours sitting next to each other in basic economy. That would have given us way too much time to stew over the various reasons that we were not right for each other. Instead, we each had an ejector seat handy. This shouldn’t be taken as a toxic prenup agreement, either. You are allowed to harbor a few doubts when you are only ankles-deep in a relationship; that makes you a (somewhat) responsible new couple.

You are best off letting some other authority — like a guidebook, an audio guide or even a tour group — take the wheel, so you two can just enjoy each other. Walking around with Fodors Paris 2020 on your waist isn’t the biggest fit in the world, but trust me, transforming into 50-something sundowners as soon as the plane lands is a seamless way to get comfortable. Embrace your inner lameness. It will allow you to envision what traveling with the person will be like a decade from now.

If this is your first time traveling together, pack a map and guidebook, and choose a navigator. (Photo: Dreamstime)

Here is a fact: 90% of all travel fights begin when both members of a relationship open their Google Maps at the exact same time. Early on, you are better off conceding authority to one phone for all directional matters. Nobody wants to be the couple in a screaming argument over which alleyway to take. (Oh wait, my satellite just re-calibrated. You are right, sorry honey.) Consider it training for the next phase of your partnership, when you are going to have to trust your boyfriend or girlfriend with things that matter much more than where the nearest ATM is.

When they ask you to take a photo, take a lot of photos

It became clear early on that one of my girlfriend’s priorities was to make our vacation as well-documented as possible, and I immediately understood why. I hadn’t yet met her family, or most of her friends, which means that she was leaving the country with someone who was still basically a mystery to the most important people in her life. A romantic trip to southeastern Europe booked a few weeks in advance? Strong catfish energy.

So, a good way to assuage any suspicions back home is by posting lots and lots of social media content. At basically every photo op, I reached deep within myself and transformed into an expert Instagram boyfriend, offering her dozens of options to prove to the world that she was A) having a lot of fun on the beautiful Adriatic Coast and B) still alive.

Feel free to get a little blissful

You are far from home throwing caution to the wind with a new partner. This sort of stunt requires a good amount of yuppie idealism, and while nobody should spoil themselves with humblebrags about how #adventurous they are, I do think everyone on a potentially irresponsible vacation is allowed some leeway to marvel at how their impulsiveness is, for once, a force for good in their lives. Some of the best memories I had from the trip were our dizzy, “I can’t believe we actually did this!” asides, which will sustain you through, say, an extended layover in Zagreb.

Let the “I love you” happen naturally

Look, you don’t fly across the country with someone you have only known for a few months without a few instincts left undeclared. We made it to Europe without officially establishing “I love you” as the sort of thing we were allowed to say to each other, and even in the most galvanizing periods of the trip, I could feel the albatross hanging over us. The unfortunate thing about albatrosses is that they start to make you plot out your life like a romantic comedy. You may, for instance, find yourself in agony at an Athens taverna, trying to decide if this is the moment you are supposed to permanently change the language of your relationship. What I learned is that you can never anticipate those quantum leaps ahead of time. You are better off just focusing on the souvlaki.

The nice thing about traveling with someone new is that it slowly chips away your internal censors to the point where something as scary as “I love you” arrives entirely naturally. You just need to trust the process and wait for your brain to get out of the way. For us, it was walking her to a taxi on the morning she left. It slipped out, almost by accident, and therefore by fate. That is how it is supposed to feel, right?