What if Everyone Lived in Tiny Homes?

One of the major contributors to climate change and environmental damage is overconsumption. Humans are so used to having everything in excess that we are inadvertently using up way too many resources, way too fast. 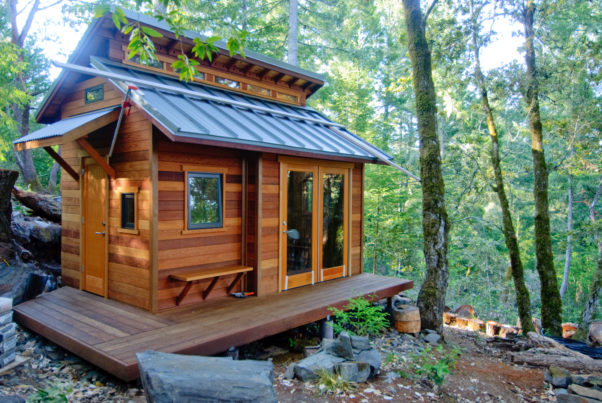 Manufacturing simple things such as clothes, paper and furniture have far reaching environmental consequences. It takes 2,700 litres of fresh water to produce a cotton t-shirt. Producing one shoe has a carbon footprint of 30 pounds. The only thing is we produce 15 billion pairs of shoes every year. That is almost double the number of people on Earth.

While we are focused on the little things such as reducing the use of plastic or using electric cars, the fact remains we are still polluting the Earth in a much more devastating way just by consuming. From the lights that are on in your room to the smartphone or computer you are reading this post from, everything we do is negatively impacting the environment.

The only real solution is to consume less and teach the next generation to do the same. The good news is people are already conscious and taking steps to reduce their consumption. Minimalism is a movement that has recently grown in popularity, and it can have a profound impact if adopted by the masses. Another movement that is making a positive change is the tiny house movement.

People living in tiny homes invariably need less furniture and have less storage space. They don’t constantly need new stuff because they have less storage space and a tiny home. They need fewer building materials and they require less energy to light their homes. Tiny homes also need less energy for heating and cooling and thus can be powered using solar panels, which makes them sustainable.

In this post, we take a look at four amazing things that are going to happen if everyone started to live in tiny homes.

Every home in America would fit in Rhode Island

There are about 118 million homes in the United States, a number that is constantly growing. If everyone decided to live in tiny homes, we would immediately save a huge land area that was previously used for sprawling mansions and big homes.

Even average sized American homes are behemoths when compared to tiny homes. An average home in the United States is about 2,687 square feet. Compare that to the size of a tiny home which is usually smaller than 400 square feet. So, if everyone in the country started living in tiny homes (about 250 square feet) then all the homes would fit in an area the size of Rhode Island.

An average cost of building a tiny home is $23,000, if the home is built by the owner. Compare that to the cost of an average home, which is $272,000. By going tiny, more people would be able to live mortgage-free and be able to achieve their retirement goals faster.

With more money to spare, people would also have less credit card debt.

As humans, we would consume half the resources

In other words, people in tiny homes saved almost 45% of energy bills. Considering that 44% of all energy produced in the United States comes from coal-burning power plants, this could essentially eliminate the pollution caused by these plants.

Landfills and trash pick up systems get a break

Landfills, recycling centers and trash incineration plants will witness far less input of trash. People living in tiny homes need fewer items, thus fewer items get disposed. We are not just talking about clothes, books and electronics. Little things such as cleaning agents and monthly consumables that go into maintaining the home.

Most people who choose a tiny living learn to let go of the non-essentials and keep things that are really important. Because of the space constraints, they shop for fewer items and only buy food items that they know are going to be consumed.

All of these tiny habits result in less trash. And if everybody shifted to a tiny home we would essentially solve the global waste management crisis.