Too Much Water May Leave You High & Dry

Summer can be unbearable for some, especially when going without water. Staying hydrated while in the heat is almost common sense, but can too much water be a bad thing?

It is possible to drink too much water and overhydrate, especially in the summer heat. (Photo: Shutterstock)

“Most of us do need more water at this time of the year; but surprisingly, you can drink too much and overhydrate,” said assistant professor Beth Kitchin, University of Alabama at Birmingham Department of Nutrition Sciences. “When people drink too much water, it dilutes the sodium in the blood to a level that’s too low.”

Some of the symptoms of low blood sodium, or hyponatremia, are the same as dehydration — nausea, vomiting, headaches, convulsions, brain swelling — and can even cause death. So, how does one stay hydrated without overdoing it?

Kitchin says thirst is actually a good indicator of whether or not you need fluids. An exception to this is older people — age 60 and older — who can become fluid-deficient quickly, particularly in hot weather.

“Whether you’re out walking, gardening or running a marathon, you should drink fluids before and during activity — roughly 4 to 6 ounces every 20 minutes,” Kitchin said. “You don’t need gallons of water during activity, which is where some people have gotten into trouble with overhydration.” 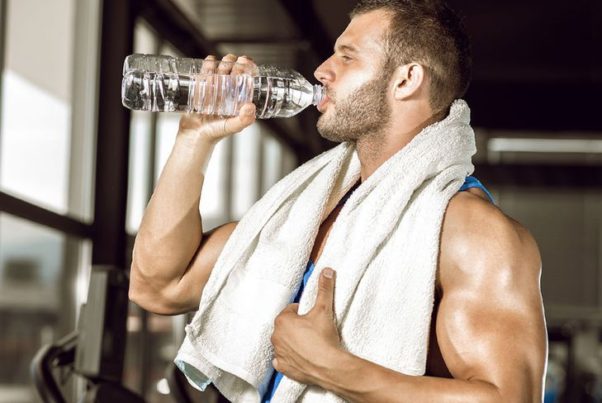 While exercising, you only need 4 to 6 ounces every 20 minutes, not gallons. (Photo: Shutterstock)

Weigh yourself after your workout

“Wouldn’t it be nice if that weight you sweat off wasn’t just sweat?” Kitchin said. “If your workouts are intense, you might find you’ve lost several pounds of water weight afterward.”

Kitchin recommends drinking 16 ounces of water for every pound lost during exercise to replace what you have lost.

A simple way to determine hydration status is by evaluating the color of one’s urine. In general, the more hydrated you are, the clearer the urine.

“The kidneys are filters, removing molecules from the blood that the body no longer needs,” said Dr. Kyle Wood, assistant professor in UAB’s Department of Urology. “When someone is dehydrated, these molecules make the urine appear more yellow and concentrated. With increased hydration, the urine becomes clearer.”

Wood says increased hydration is important in preventing kidney stones, and he advises patients to try to have at least 2.5 liters of urine output per day, unless another medical condition prevents them from increasing fluid intake. Urine color can also change secondary to medications and/or supplements.

“While the average fluid lost from our bodies does turn out to be around eight cups a day, you don’t need to replace all of it with plain old water,” Kitchin said. “We get water replacement from fruits, vegetables and other beverages such as milk, tea, soda and, yes, even coffee.”

However, Kitchin adds that water is the best for boosting body fluids because it is absorbed the fastest of all the fluids.

Article by Adam Pope, University of Alabama at Binghamton