It is the summer of sequels as Sony Pictures’ The Equalizer 2 finished in first place last weekend (July 20-22) with $36.01 million. This is the 10th weekend in a row that sequels and/or prequels dominated the top two spots at the North American box office.

The Equalizer 2 finished in first place over the weekend with $36.01 million. (Photo: Sony Pictures)

The Equalizer 2 was projected to finish in second place, it surpassed expectations. The Denzel Washington action sequel started 5.4 percent above 2014’s original Equalizer, which also debuted in first place with $34.1 million. However, it fell 9.1 percent behind the original when adjusted for inflation.

Washington’s role as a former CIA black ops agent who comes out of retirement to avenge society’s ills echoes what Liam Neeson did with the Taken franchise, which similarly gave that actor a late-career boost as a bona fide action star. For comparison, Taken 2 debuted with $49.5 million in October 2012 vs. Taken’s $24.7 million, although its fall down the charts was considerably faster than its predecessor and it ultimately finished with a lower total in North America ($139.8 million vs. $145 million). Given that The Equalizer 2 opened with $2 million more than the original, it will be interesting to see if it can similarly top $100 million domestically by the end of its run. For the record, this is Washington’s fourth film with director Antoine Fuqua and their third hit, with the only misfire from the two being 2016’s Western revival The Magnificent Seven.

The movie expected to take first place, took the runner-up spot instead. Universal Pictures’ Mamma Mia! Here We Go Again musical sequel debuted with $34.95 million. That is 25.9 percent ahead of the original 2008 Mamma Mia! debut of $27.7 million. Similar to The Equalizer 2, the sequel opened 3.5 percent behind the original when adjusted for inflation.

Given its higher opening weekend tally, it will be interesting to see how Here We Go Again holds up in the weeks ahead. The first Mamma Mia! hung on a while, never dropping more than 40 percent weekend-to-weekend in its first two months and finishing with $144.1 million in North America. Perhaps a better comparison for Here We Go Again would be 2015’s Pitch Perfect 2, which opened with $69.2 million but proved considerably more front-loaded than the first movie, ultimately finishing with $184.2 million. If Here We Go Again were to follow a similar trajectory, it would be looking at a final gross somewhere around $90 million, although it seems likely to surpass the $100 million mark if the first film’s lengthy performance is any indication. Despite losing out on a first place debut, it is a fantastic opening that proves the Mamma Mia! franchise is alive and well after a decade-long hiatus. 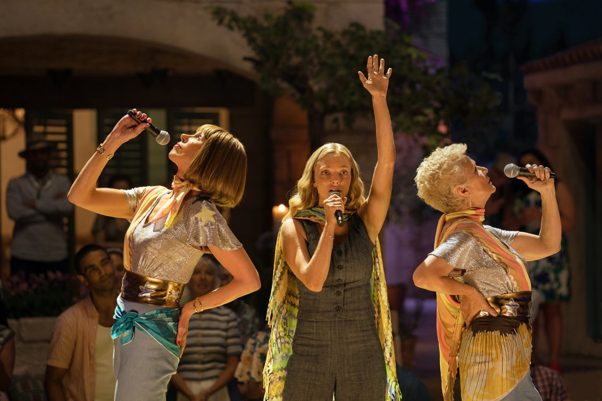 Last weekend’s leader, Sony’s animated Hotel Transylvania 3: Summer Vacation fell 46.1 percent to take in $23.77 million in its second weekend and a strong total of $91.70 million after 10 days. Although that is a steeper drop than either of the first two films in their second weekends, Hotel Transylvania 3 benefitted from strong midweek business given its release at the height of summer when kids are on summer vacation. This coming weekend could prove to be a more competitive in terms of the family audience, as Warner Bros. Pictures’ animated Teen Titans Go! To the Movies hits theaters.

In fourth place, Disney Studios-Marvel Studios’ Ant-Man and The Wasp fell 43.2 percent to $16.51 million, giving the Marvel Comics Universe sequel $165.01 million after three weeks. That puts the film roughly 24 percent ahead of the first Ant-Man at the same point and coming up on that movie’s $180.2 million final total. It should easily surpass that amount by the end of this coming weekend, as well as the lifetime totals of MCU stablemates Captain America: The First Avenger with $176.6 million and Thor with $181 million.

Continuing strong in fifth place was Disney-Pixar’s Incredibles 2, which earned $11.90 million in its sixth weekend. Slipping just 26.8 percent from its performance the previous weekend, the animated blockbuster now stands at a hefty $557.71 million in North America, with still plenty of wind left in its sails.

Dropping from third place the previous weekend to sixth place in its second weekend was Universal’s Skyscraper, which fell 54.4 percent to $11.36 million. That gives the action film just $47.15 million after 10 days, a considerably lower amount than a typical Dwayne Johnson movie at the same point. In comparison, April’s Rampage had $65.6 million after 10 days, while San Andreas had $98.4 million. Based on its current trajectory Skyscraper is shaping up to be a misfire for the actor domestically, and it should finish in roughly the same territory as last year’s similarly-underperforming Baywatch, which finished with $58 million in North America. That said, the film is making up considerable ground overseas.

In seventh place, Jurassic World: Fallen Kingdom added another $11.26 million to its total, giving it $384.16 million after five weeks and pushing it to No. 34 on the all-time domestic chart.

Eighth place went to Universal’s horror prequel The First Purge with $5.11 million for a total of $60.32 million after 17 days.

The weekend’s other new release was BH Tilt’s horror sequel Unfriended: Dark Web, which grossed an mediocre $3.65 million. That is a far cry from the $15.8 million debut of Universal’s original Unfriended in April 2015, although that film opened on many more screens. Nonetheless, it is a low-budget effort that stands as one of BH Tilt’s better debuts alongside such titles as this year’s Upgrade with $4.6 million opening and 2016’s The Darkness with $4.9 million.

Rounding out the Top 10 is Annapurna’s critically-acclaimed Sorry to Bother You, which expanded by 245 locations and fell 32.1 percent to $2.86 million in its second weekend of wide release and its third overall. The total for the Boots Riley-directed film now stands at $10.29 million.