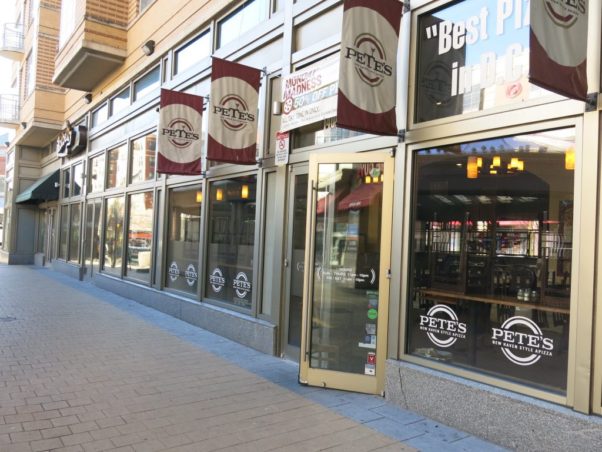 Pete’s Apizza in Columbia Heights closed Sunday. It, Potbelly and Five Guys will be replaced by a Wawa convenience store.
(Photo: Popville)

The pizzeria was set to close yesterday, Apr. 22. Columbia Heights was the original Pete’s location, which opened in 2008 serving crispy, thin crust New Haven-style pies and has since expanded to Friendship Heights, Silver Spring and Clarendon.

Wawa opened its first D.C. 9,200 square-foot location – the largest ever — at 1111 19th St. NW near Farragut North last year. When the company announced the first store, president and CEO Chris Gheysens said the company planned to open five to 10 stored in D.C. neighborhoods, including Georgetown, the West End, NoMA, Capitol Hill and the Capital Waterfront, as well as nearby Maryland and Virginia suburbs in the next two years, 10-20 stores in the next five years and 30-50 stores when at full density. A second D.C. store at 1222 Wisconsin Ave. NW in Georgetown is scheduled to open near the end of this year.

Chris Donatelli of Donatelli Development, which owns the building, confirmed Wawa would be replacing the three restaurants and told the Popville blog that Pete’s, Potbelly’s and Five Guys’ 10-year leases were coming to an end.

We reached out to Wawa for details on the store, but did not receive a response. There is no word yet on when Potbelly or Five Guys will close.

Little Sesame, the hummus shop from the owners of the former DGS Delicatessen, will open in the former Veloce pizzeria space at 1828 L St. NW. 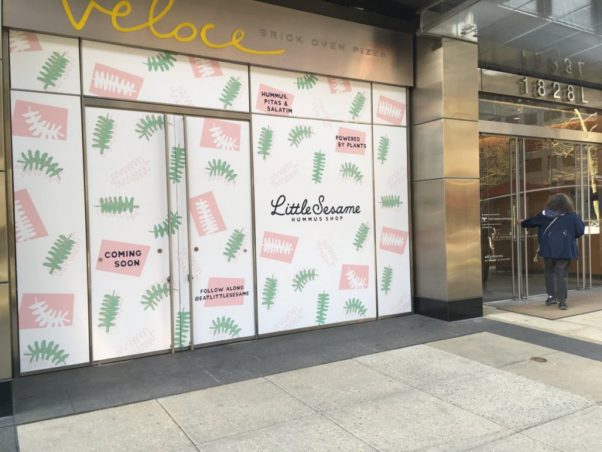 Little Sesame is a fast casual restaurant that celebrates hummus. The restaurant’s signature hummus bowls are topped with seasonal vegetables with a warm pita. There is no word yet on what the new location’s menu will be. 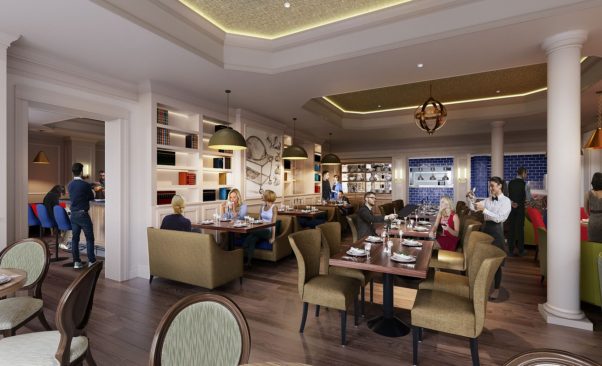 An architect’s rendering of the inside of Scotts Restaurant and Bar in Penn Quarter. (Renderng: HapstakDemetriou+)

The 3,500-square-foot restaurant and bar seats 70 diners in the dining room with another 40-seats at the long bar, which will serve cocktails and a collection of malt whiskeys and other liquors. The adjacent 850-square-foot private Cask Club with a separate entrance will seat 35. The American brasserie will serve a collection of salads, meats, house-made charcuterie and fresh seafood for both lunch and dinner, including a raw bar and silver carving trolley serving a rotating selection of carved meats including prime rib, pork and lamb.

Scotts Cask Club is a private members’ club, which will showcase many international spirits and cask whiskeys, brandies, tequilas and rums from the Scotch Malt Whisky Society, the world’s premier cask spirit supplier. Set in a private drawing room, members who pay $495 per year can enjoy an exclusive bar. Members also get priority reservations at the restaurant and bar, as well a 10 percent discount on all food in the restaurant.

Owner Simon Lowe opened his first restaurant in London in 1984 and now owns a luxury group of hotels and spas in England and the Caribbean along with other properties, which include Fawsley Hall Hotel & Spa in Northamptonshire, The Park Hotel and Golf Club in Bath and Grayshott Health Spa in Surrey.

“I’ve been looking to open a restaurant concept in the D.C. marketplace for some time now,” Lowe said in a statement. “My wife and I have a personal connection to the area as our daughters live on the East Coast. We built a home near Leesburg, Va., a few years back because we wanted to be closer to them.”

Lowe designed the layout and worked with architects HapstakDemetriou+ to create the modern British décor. The design spans multiple historic facades that influence the interior details through use of mouldings and trims. The interior features a blend of textures, patterns, and colors set against a neutral backdrop. The cask club includes a fireplace and library.

Today (Apr. 23) is the last day for Rare Sweets, 963 Palmer Alley NW, in the luxe CityCenterDC. 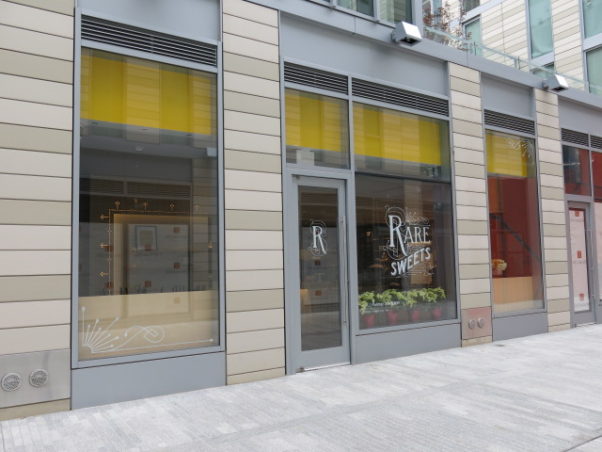 The bakery, which opened in December 2014, was one of the development’s few locally-owned businesses and one of the first food shops to open in the upscale development. Rare Sweets operated out of Union Kitchen before opening its own brick-and-mortar location.

Owner and pastry chef Meredith Tomason announced the closing on Instagram. “On Monday, April 23rd, we’ll be serving our last slice of cake here at our bakery at CityCenterDC. Thanks for the love and support over the past 3 ½ years. It takes a community to build a baker, and we would not [be] where we are today without you. Many many thanks!!”

“We love being here and part of the community, but it’s not making economic sense for our business model,” owner and pastry chef Meredith Tomason told Washingtonian magazine.

In her Instagram post, Tomason said there would be a “Farewell Cake Walk” today from 5-7 p.m. for some sweet giveaways and customer send off.

José Andrés’ America Eats Tavern, which had been in the Ritz-Carlton Tysons Corner and is set to open at 3139 M St. NW in Georgetown this summer, is partnering with the Wolf Trap Foundation for the Performing Arts, to be the featured onsite restaurant 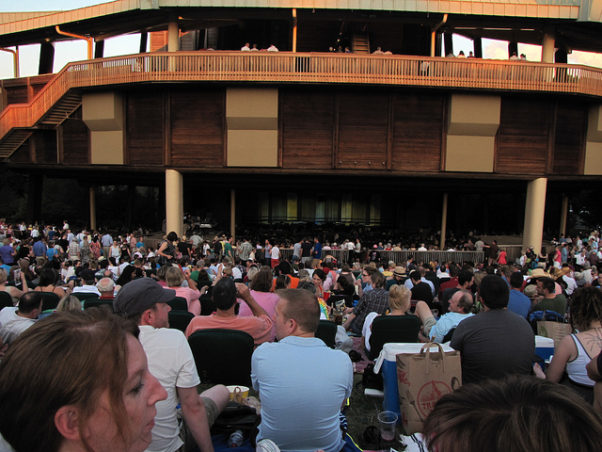 Ovations by America Eats will serve Andrés’ take on American classics to those attending the shows al fresco before the show, as well as offering prepared picnics.

“We are thrilled to be forging a relationship with Wolf Trap, one of the most amazing locations in our country to experience a concert or performance,” Andrés said in a press release. “America Eats Tavern is all about celebrating the diverse culinary heritage in this country, and we are excited to complement the enriching experience of taking in a show at Wolf Trap!”

The restaurant will begin taking reservations on May 1 for Wolf Trap members and May 6 for the public.

Naan & Beyond, which closed at 1710 L St. NW in December, has opened a new location a few blocks away in the former Juice Joint space at 1025 Vermont Ave. NW. 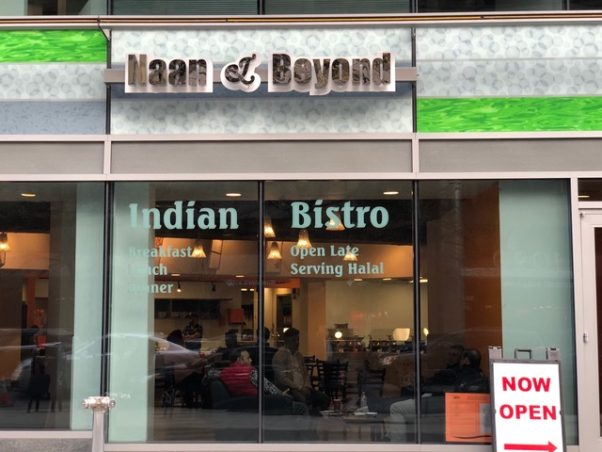 The new fast-casual Indian restaurant seats 61 inside and 45 on the sidewalk café. It also has a liquor license and can host live entertainment inside.

Brasserie Beck will be U.S. flagship for Brussels Beer Project 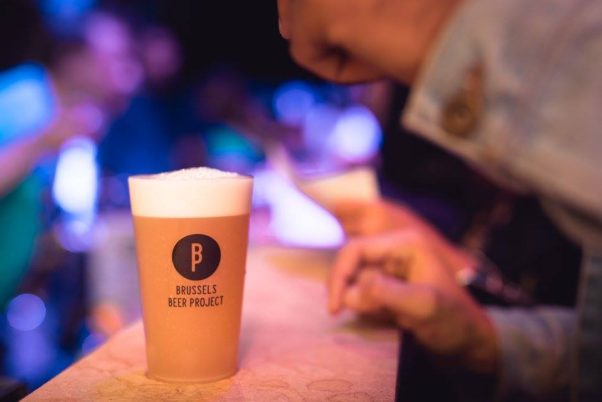 The partnership will kick off with a special happy hour tasting of the beers, paired with hors-d’oeuvres to complement the selections. BBP’s co-founders Sébastian Morvan and Olivier de Brauwere will also be on hand to celebrate the label’s first U.S. flagship bar.

BBP was established in 2013 and is credited with bringing the craft beer movement to Brussels through crowdsourcing and community tastings. 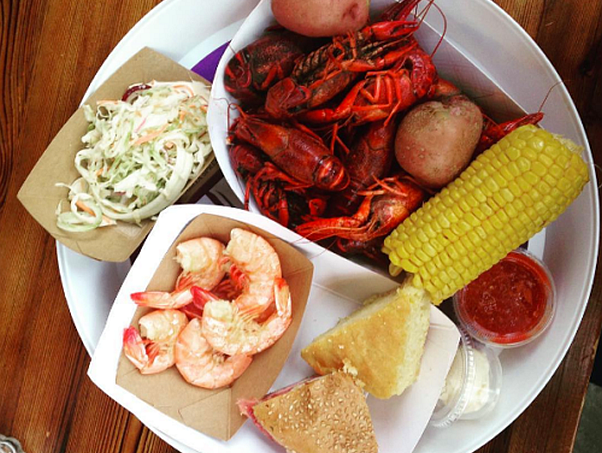 For $35, diners will get a pound of Louisiana crawfish with corn on the cob, new potatoes, coleslaw, mini muff-a-lottas and cornbread. (Photo: Bayou Bakery)

The cost is $35 and includes Louisiana crawfish with corn on the cob , new potatoes, coleslaw, mini muff-a-lottas and cornbread. Empty platters can be filled up with a second helping, while supplies last. House-made meat pies and peel-and-eat Gulf shrimp by the half pound and by the pound will be sold la carte. Hurricanes will be $6, Abita drafts $5 and pitchers $15.

Bayou Bakery will also host crawfish boils on May 26 and June 30.