The Walt Disney Studios/Marvel Studios blockbuster Black Panter spent its fourth weekend (March 9-11) in first place with $40.82 million, a feat accomplished by only one other film in the past two years: Jumanji: Welcome to the Jungle, which did so just last month. 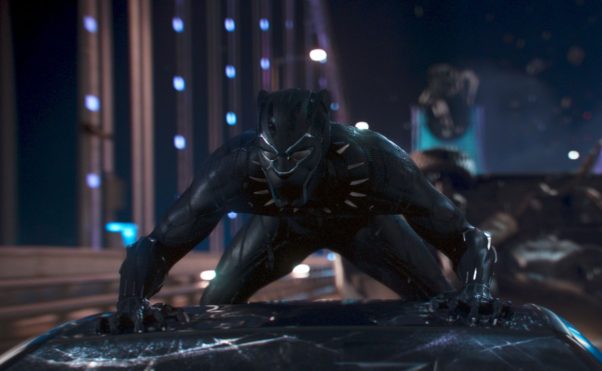 Black Panter took in $40.82 million at the box office over the weekend for first place, holding off A Wrinkle in Time (Photo: Marvel Studios)

In fact, it may even be possible given current projections that Black Panther could spend its fifth weekend at the top this coming weekend, which would make it the first film to do so since 2009’s Avatar. The last film to do so before that was 1999’s The Sixth Sense. In the process, Black Panther reached $1 billion worldwide, something few people would have predicted prior to its release.

Falling just 38.4 percent from the previous weekend, its total now stands $561.70 million in 22 days, surpassing both Rogue One: A Star Wars Story with $532.2 million and The Dark Knight with $534.9 million for seventh all-time domestically. At that pace, the film will easily outperform Marvel’s The Avengers – the top-grossing Marvel Comics Universe release for over five years running with $623 million.

Disney’s family fantasy A Wrinkle in Time opened in second place with $33.12 million, about in line with other similar films such as Tomorrowland and The Maze Runner.

Reviews for the Ava DuVernay-directed film starring Oprah Winfrey, Reese Witherspoon, Mindy Kaling and Chris Pine skewed negative, which likely put something of a damper on it. Based on the novel by Madeleine L’Engle, A Wrinkle in Time was heavily hyped by Disney, but negative buzz likely hurt its chances of hitting the higher end of estimates. At a reported cost of $103 million, it will need to hold up exceptionally well in the coming weeks to top out north of $100 million domestically. On the plus side, with Jumanji: Welcome to the Jungle slowly fading and Peter Rabbit on the downside of its run, family competition isn’t too stiff over the next couple of weeks, so it could benefit from the lack of similar movies in theaters.

Horror sequel The Strangers: Prey at Night debuted in third with $10.40 million, which is about half of what the first film opened to back in 2008. Released by upstart distributor Aviron, the company behind last year’s Halle Berry thriller Kidnap, the film received mixed-to-negative reviews. Its distance from the original film’s release may have hurt its prospects, but with a reported budget of just $5 million, it seems destined for profitability despite a steep fall from its prequel. Luckily there are no other horror films currently in wide release, giving it a wider berth with its intended demo.

Among holdovers, 20th Century Fox’s Red Sparrow with Jennifer Lawrence in the lead role fell 49.5 percent to $8.50 million for a fourth place finish, giving it an underwhelming total of $31.47 million over 10 days. The spy thriller needed to hold better than that after a mediocre $16.85 million debut the previous weekend, but it looks destined to fade quickly from theaters.

In fifth place, Warner Bros. Pictures’ Game Night, which stars Rachel McAdams and Jason Bateman, took in $7.86 million in its third weekend of release, a drop of just 24.5 percent. Although it had a rather mild debut, the comedy has been holding well in the weeks since, indicating strong word-of-mouth. Its domestic earnings now stand at $45.00 million.

Sony Picture’s animated/live-action hybrid Peter Rabbit slipped 32.3 percent in its fifth weekend to $6.78 million and sixth place, giving it a domestic total of $93.43 million to date. Seventh place went to MGM Studios’ Death Wish, which fell 49.4 percent to $6.58 million in its second weekend and $23.87 million so far in North America. Paramount Pictures’ Annihilation finished in eighth with $3.30 million for a $26.25 million to date.

In addition to A Winkle in Time and The Strangers, there were two other major wide-to-semi-wide releases last week. Entertainment Studios’ The Hurricane Heist was the only one to finish in the Top 10 with $3.02 in ninth place. The reported $35 million action-heist film, which wasn’t screened in advance for critics, was a difficult sell in the face of competition from the likes of Black Panther and A Wrinkle in Time.

Debuting outside the Top 10 was Amazon and STX’s Gringo, which earned $2.72 million in 11th place despite stars David Oyelowo and Charlize Theron. The marijuana comedy simply wasn’t able to break through in a weekend crowded with heavily-hyped movies, Mixed-to-negative reviews and poor word-of-mouth didn’t help.

Sony’s Jumanji: Welcome to the Jungle earned $2.74 million for tenth place. That marks its 12th weekend in the Top 10, the first time a movie has done that since La La Land.It is also the fifth film in the last five years to achieve the feat, along with Zootopia, Frozen and Silver Linings Playbook. The film has now earned $397.25 million domestically.