Last weekend (Dec. 1-3) was a quiet one at the box office with no new movies and no change in the Top 6 movies. Walt Disney Studios-Pixar’s animated Coco gave an encore performance, finishing on top for a second consecutive weekend with $27.53 million. 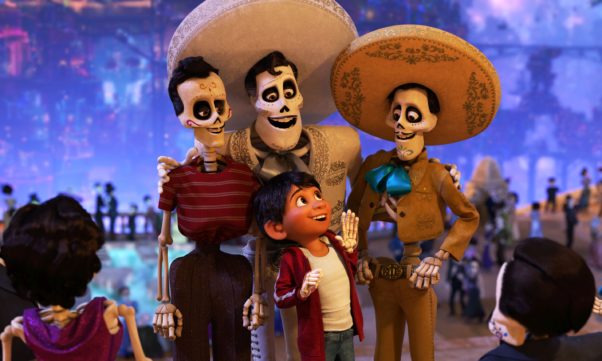 Disney-Pixar’s Coco finishend in first for teh second weekend with $27.53 million. (Photo: Disney-Pixar)

Coco fell 45.8 percent from the previous weekend and gives the film $110.11 million in its first 10 days, slightly behind Moana‘s $119.7 million over the same period last year and far ahead of 2015’s The Good Dinosaur, which grossed just $75.5 million by the end of its second weekend.

Warner Bros. Pictures’ Justice League again finished in second with $16.65 million, bringing the superhero extravaganza to $197.41 million in 15 days. Though it is poised to cross the $200 million threshold this week, the latest DC Extended Universe entry is a box office disappointment by lofty superhero-movie standards, particularly given that it brought a number of A-list characters together in the same film.

Repeating in third place, Lionsgate’s Wonder enjoyed another great weekend with $12.15 million, bringing its total gross thus far to $87.68 million in just 15 days. The Julia Roberts-Owen Wilson weeper has been a big hit with audiences looking for inspirational fare during the holiday season and will easily top $100 million by this coming weekend.

In fourth place, Disney-Marvel’s Thor: Ragnarok added another $9.89 million to its already-gargantuan total, giving the superhero epic $291.63 million in five weeks. Look for it to cross $300 million by this coming weekend, by far the highest gross of any standalone Thor film. The next-highest is Thor: The Dark World, which finished its domestic run with $206 million.

Daddy’s Home 2 finished in fifth with $7.57 million, bringing its total to $82.89 million in four weeks. That is considerably behind the first film’s $129.5 million over the same period. Sixth place, meanwhile, went to 20th Century Fox’s hit adult-oriented thriller Murder on the Orient Express, which brought in $6.77 million, bringing its total to $84.87 million so far. The $100 million benchmark isn’t far off for the star-studded adaptation of Agatha Christie’s famed mystery novel.

Greta Gerwig’s Lady Bird also did well in its first weekend in wide release, earning $4.29 million on 1,194 screens. That gives the Oscar-buzzed A24 release $16.84 million so far.

Ninth place went to Sony Pictures’ faith-based animated comedy The Star, which brought in $4.08 million, for a $27.36 million total after three weeks. Though it is miles off from Coco, the Walden Media co-financed film came with a much-cheaper $20 million price tag.

Rounding out the Top 10 was A Bad Moms Christmas, which took in $3.39 million in its fifth weekend. That gives the STX sequel’s total to $64.74 million, a significant drop from the first film’s $95.2 million by the same point last year. but still a reasonably good total considering the film’s reported $28 million budget
.
Falling outside the Top 10 was the Denzel Washington legal drama Roman J. Israel, Esq., which faltered in its second week of wide release with just $1.96 million on 1,669 screens. The Sony Pictures release likely suffered from its mixed-to-poor reviews, as critical notices are especially important in a time of year chock-full of Oscar hopefuls vying for the dollars of discerning moviegoers.