“Mm-mm! This is a tasty burger. Vincent, you ever had a Big Kahuna burger?” Samuel L. Jackson asks John Travolta’s character in Pulp Fiction. Travola shakes his head. “Want a bite? They’re real tasty,” he asks Travola’s character, who declines. “Well if you like burgers, give them a try sometime.” 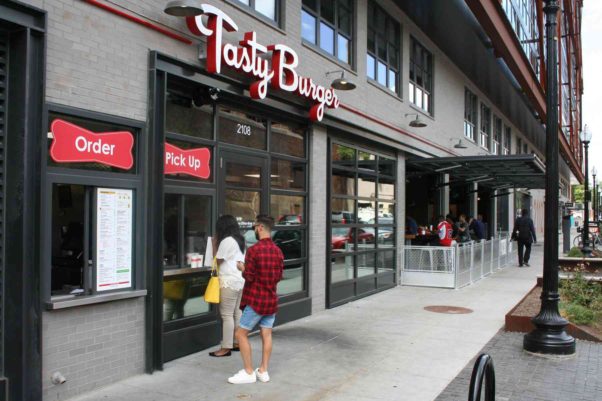 Now, you too can have a bite of Tasty Burger, 2109 Eighth St. NW, a Boston-based burger joint that opened in late July in Shaw’s Atlantic Plumbing Building, down the block from the 9:30 Club and a block from Howard University Hospital.

Tasty Burger was founded by three chef friends in 2010 in the shadow of Boston’s Fenway Park. This is the first location outside of Boston.

CEO David Dubois told DC on Heels that Shaw was one of two locations he fell in love with – the other was Navy Yard – when he scouted the city for locations about four years ago. When an employee with developer JBG who previously worked in Boston called and offered the location, the decision was made.

Dubois said there are no plans for rapid expansion in the DMV similar to Smash Burger or Shake Shack when asked if he was still eyeing Navy Yard. “We’re a neighborhood restaurant group. It isn’t about making a statement for the brand, it was about being in D.C., a place we like.”

It doesn’t hurt that students at Howard University haven’t have a place to get burgers except McDonald’s since the Five Guys on Georgia Avenue closed. Tasty Burger offers a “Starving Student” special with a hamburger or cheeseburger, fries and a can of beer for $10 with student ID. It also has a walk-up window for to-go orders and is the first Tasty Burger with a full bar including draft and canned beer, wine and boozy milkshakes. 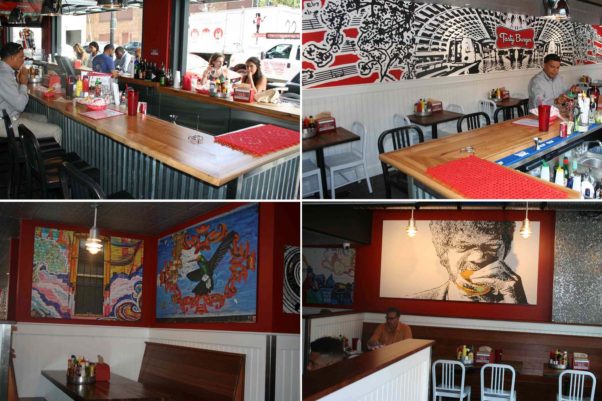 The 1,800-square foot space decorated in the chain’s red and white color scheme, includes an image of Jackson eating his own tasty burger, a custom 20-foot mural in the bar area that features the iconic pattern of a Metro station and a score from Duke Ellington, as well as photographs of local graffiti and other Shaw landmarks The restaurant seats 44 inside and 22 around the indoor/outdoor bar that opens onto Eighth Street with giant garage doors. There is also a free foosball table, a glass Coke bottle chandelier and a digital juke box.

Tasty Burger serves all-natural, hormone- and antibiotic-free third-pound beef patties on a bun from Gold Crust Baking Co. of Landover. Each table has a tray with 14 condiments including Heinz ketchup, mustard, sweet relish, malt vinegar and Heinz 57 Sauce. There are also store brand spicy ketchup and fry seasoning. The spicy ketchup has a bit of a kick and the fry seasoning – good on the fries and onion straws, which the restaurant incorrectly calls onion rings — is sweet and spicy with sugar, cinnamon and brown sugar.

There are 11 burgers to choose from on the menu. I opted for the Rise ’N Shine burger with cheese, fried egg, bacon and ketchup. The patty is thin, so it is not as juicy as I’d have liked – more like McDonald’s and less like Five Guys – but the flavor was good. A better choice may have been the Big Tasty, the chainlet’s version of a Big Mac, with cheese, lettuce, pickle, red onion, tomato and “Tasty” sauce. The vegetables would have added some freshness to each bite. I also tried the Chicky Chicky Parm Parm, crispy chicken topped with marinara sauce, melted mozzarella AND fried mozzarella. It was excellent – a bit messy, but every sandwich comes wrapped to be eaten without getting anything on you – with a thick, juicy piece of chicken, the right amount of marinara sauce and lots of ooey, gooey mozzarella. The addition of the fried mozzarella on top makes this a cheese lovers’ dream. 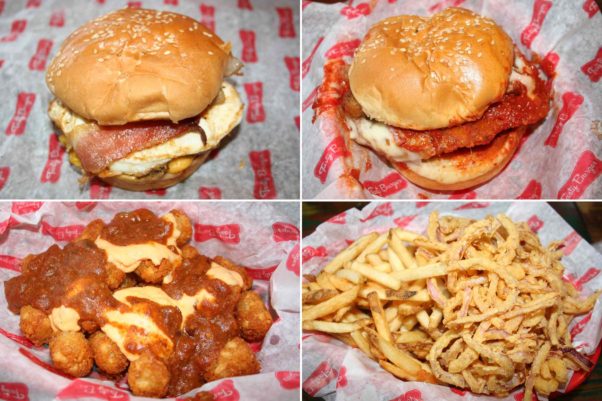 Menu choices include the Rise ‘N Shine burger (clockwise from top left), the Chicky Chicky Parm Parm, a 50/50 basket of fries and rings and an tater tots. (Photos: Mark Heckathorn/DC on Heels)

Unfortunately, the sides are not as noteworthy as the sandwiches. As previously mentioned, the onion rings are really a tangle of onion straws with more batter than onion in each bite. And the frozen shoestring potatoes pale in comparison to Five Guys or Z Burger’s house-made fries. The best choice are the tater tots, but skip the chili and cheese topping. The chili is mostly beans and tastes like it comes from a can, while the cheese tastes like warmed up generic Cheez Whiz. Order them plain and add the fry seasoning instead.

The bar offers wine and beer with local offerings from Atlas Brew Works, D.C. Brau and Duckpin, and Tasty Ale, brewed just for the restaurant by Sam Adams. Cocktails include a raspberry gin rickey; a bloody mary made with seasoning from neighboring Bazaar Spices’ spice blend and a smoked bacon chipotle salt rim; a Pickle Back, a shot of whiskey and Tasty Burger’s pickle juice; or the Shift Drink made with Narragansett and a shot of Fernet Vittone. There are also adult milk shakes like the Grasshopper, the Monk with Melleti and green chartreuse, white Russian, strawberry daiquiri and pina colada. I ordered the pina colada, and although my food arrived before the milkshake, it was worth the wait. It tasted like I was on a beach and I couldn’t taste the alcohol so it would have been easy to indulge in a few. The bar also offers Cheerwine soda, a southern wild cherry soda that is sort of a mix between cherry and Dr. Pepper, by the bottle.

Tasty Burger is open from 11 a.m.-1 a.m. Sunday through Thursday and 11 a.m.-2 a.m. Friday and Saturday. Happy hour from 5-7 p.m. Monday through Friday features $5 cocktails and $3 beers, and yappy hour from noon-2 p.m. Saturdays and Sundays has the same specials with free dog bones and bowls of water for your pup.