Takoda, 715 Florida Ave. NW, opened at the corner of Florida Avenue and Eighth Street across from The Shay development over the weekend. 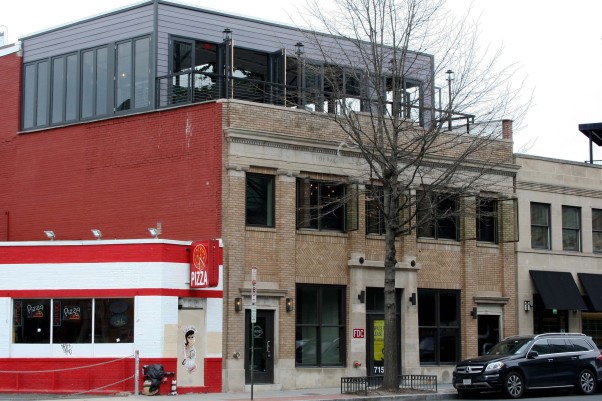 Takoda opened in Shaw Friday with 24 beers on drafts and more than 50 whiskeys.
(Photo: Mark Heckathorn/DC on Heels)

Owned by Ryan Seelbach and Eric Lund, the restaurant and beer garden is on the second floor and rooftop of the old Federal Life Insurance building, which was built in 1922. Takoda combines a small retro American menu with 24 American beers including local craft beers and basics like Natty Boh and PBR on draft and more than 50 whiskeys, about a quarter of which are bourbons.

Edit Lab at Streetsense designed the 4,600-square-foot space. The second-floor dining room features the original exposed brick walls and exposed beam ceiling, light wood floors, wrought iron, blue velvet curtains, a gray and aqua palette, and mosaic tiles on the floor around the two community high-top drink rails with metal chairs and wooden banquettes. There’s also a 17-seat wood bar. The rooftop deck, with sweeping views of Shaw, U Street and Le Droit Park, features a 23-seat tiled, horseshoe-shaped bar, French doors that can be opened in warmer weather and heaters for the winter, a skylight with planters and the back wall (the only one that isn’t glass) will be covered in ivy and vines. Both floors seat 65 each. 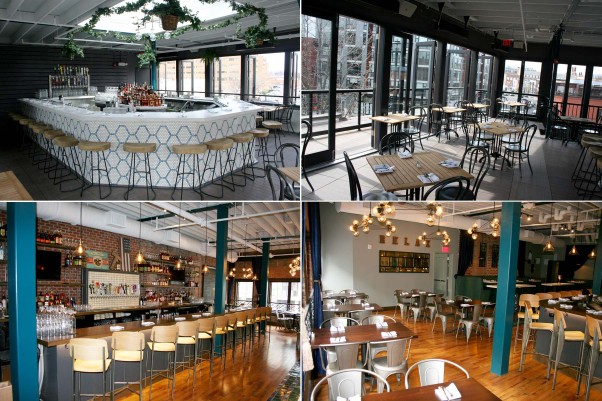 Chef Damian Brown, formerly of 8407 Kitchen, Vidalia, the Occidental Grill, Blue Duck Tavern and most recently Staunton and Greene, designed the short menu to compliment the bar offerings. “It’s Southern-influenced bar food,” Brown told DC on Heels. “It all pairs well with beer. Have some (rosemary parmesan) tarter tots and you want beer. Eat the bacon popcorn (with parmesan and chives), you want beer.”

There are only four entrées on the menu: pan-seared salmon cakes with a shaved vegetable salad ($17); shrimp and grits with Tasso ham pepper sauce, sautéed spinach and a sunny-side up egg ($17); brisket flatbread ($13); and chicken and sweet potato waffle with pecans and black pepper syrup ($14). The rest of the menu includes small plates like a soft pretzel and beer cheese, spinach dip with grilled flatbread, brisket sliders on a mini pretzel buns and skillet mac and cheese priced from $4-$9. There are also four kinds of wings: Buffalo, Old Bay, garlic parmesan and Brown’s speciality, PB&J BBQ. “I make the wings like I make my sandwiches, with a little bit of peanut butter and a lot of jelly with chopped Virginia peanuts,” Brown explains.

The menu also features salads, including a cranberry kale with radish, apple and pecans, for $6 each; a soup of the day for $5; a cheeseburger, veggie burger and triple bacon burger that each come with one side for $13-$15; and desserts including a molten chocolate s’more, apple pie, seasonal crème brulee and deep fried Oreos for $5-$8. “It’s a good balance,” Brown said of the menu, which is available on both floors. A pared-down late night menu is available after 11 p.m-1 a.m. on Friday and Saturday.

At the bars, the 10 cocktails, all $11 each, lean classic with a bourbon focus, including three styles of mules and the Seelbach — a drink created in the early 1900’s by co-owner Seelbach’s family at the Seelbach Hotel in Louisville. It combines sparkling wine, bourbon and bitters. There is also a wine list with six choices priced at $10 a glass or $40 a bottle. The aforementioned drafts are priced from $7-$10, while the basics are $5-$6.

Happy hours from 5-7 p.m. Monday through Thursday feature food and beverage pairings. Monday is half off wine bottles and small plates; Tuesday brings half off cider and salads; Wednesday features half off whiskey and wings, and Thursday is half of basic beers and burgers.

Takoda is open for dinner from 5-11 p.m. seven days a week. The bar is open from 5 p.m.-midnight Monday through Thursday, 5 p.m.-3 a.m. on Friday, noon-3 a.m. on Saturday and noon-11 p.m. on Sunday. Brunch will begin in April. Be warned, however, neither the dining room nor beer garden are handicapped accessible.