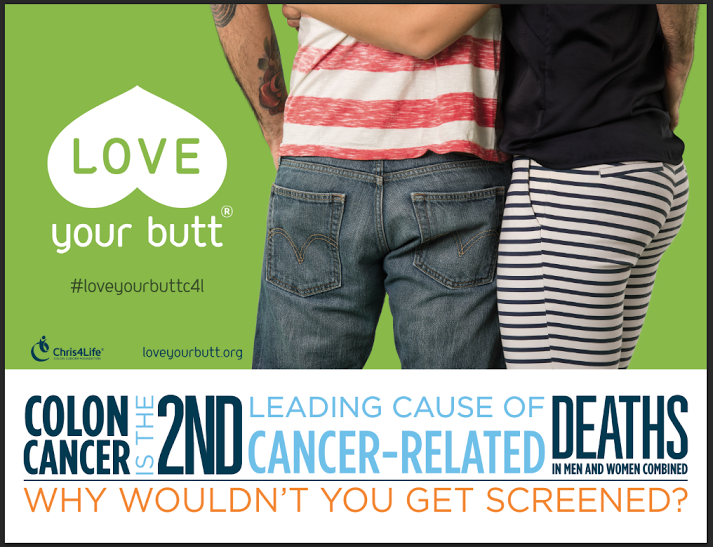 One of the Love Your Butt ads. (Photo: Chris4Life Foundation)

In its third year, the mission of the Love Your Butt awareness campaign is to encourage people to open up and talk about their bottom and/or create a call to action for individuals to get screened. The 2013 campaign focused on people stating various names they call their bottom. The 2014 campaign brought the attention down to the heart of the targeted area and focused on a variety of bottoms to bring the message front and center. This year’s campaign focuses on the power of relationships and how having the “butt talk” with friends, family, significant others and loved ones is important to help raise awareness to get screened, which ultimately saves lives. The campaign will run online nationally on various platforms, as well as on TV, online, public transportation and radio and in print in several markets – kicking off in March and running throughout the year.

Founded in March 2010, the foundation is named after Christine “Chris” Sapienza, a Pittsburgh native, wife, mother, musician and small business owner who touched many lives and lost her battle with colon cancer. Spaienza’s son, Michael Sapienza, created the Foundation.

Mar. 7: Spring in “Blue” fashion/fundraiser hosted by Elie Tahari. The Elie Tahari store at Tysons Galleria in Tysons Corner will host a special shopping event from 5-8 p.m. previewing their spring collection. Colon cancer survivors will model the brand’s spring collection, which features various shades of blue, the official color of colon cancer awareness. Customers will receive 20 percent off of new arrivals and 10 percent of the proceeds will go to Chris4Life. Champagne and light bites will be served.

Mar. 16-17: Chris4Life will participate in the Right Scan, Right Time Capitol Hill and Advocacy Academy to call on members of Congress to preserve access to medical imaging and radiation therapy services by rejecting cuts to reimbursement.

Mar. 22: 10th annual Scope It Out 5K Race held at 9 a.m. on Sunday, Mar. 22, in the heart of downtown D.C. Registration is open with the race kicking off at Freedom Plaza, 13th Street and Pennsylvania Avenue NW, and will include a scenic tour of popular D.C. sites. The annual event attracts approximately 3,000 participants and is the largest colon cancer race in the country.

Mar. 31: Eat4Life: A Chef Cook-Off chef event. Local chefs from the DMV will participate in the third annual Eat4Life hosted by the Chris4Life young professional board. Notable area chefs will prepare colon-friendly and cancer friendly dishes providing guests healthy meal options while helping raise funds and awareness for the foundation.

In partnership with the National Colorectal Cancer Roundtable, co-founded by the American Cancer Society and the Centers for Disease Control and Prevention, Chris4Life is part of an initiative called “80% by 2018” in which organizations have committed to eliminating colorectal cancer as a major public health problem with a shared goal of reaching 80 percent of adults screened for colorectal cancer by 2018.