“Into the Storm” Movie Review

Avoid Getting Sucked Into the Storm

In the span of a single day, the town of Silverton is ravaged by an unprecedented onslaught of tornadoes. The entire town is at the mercy of the erratic and deadly twisters, even as storm trackers predict the worst is yet to come. Most people seek shelter, while others run towards the vortex, testing how far a storm chaser will go for that once-in-a-lifetime shot. Told through the eyes and lenses of professional storm chasers, thrill-seeking amateurs and courageous townspeople. 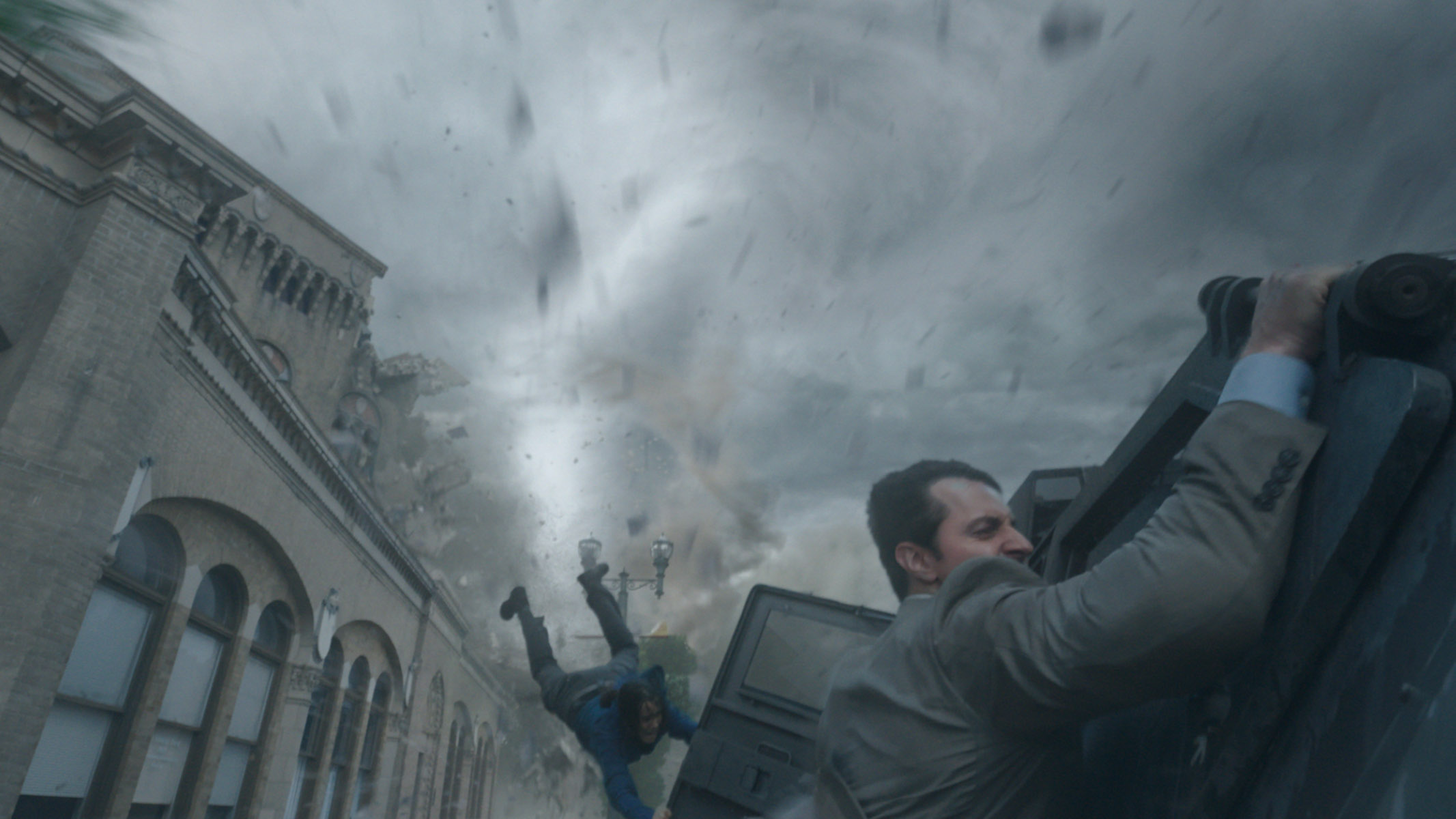 Sarah Wayne Callies as Allison (left) and Richard Armitage as Gary in Into the Storm. (Photo: Warner Bros. Pictures)

The day after a tornado claims the lives of four teenagers in Northern Oklahoma, the Titus (a tank-like vehicle tricked out with weather equipment and cameras) storm-chasing team consisting of veteran leader Pete (Matt Walsh), meteorologist Allison (Sarah Wayne Callies) and camera operators Daryl (Arlen Escarpeta) and Jacob (Jeremy Sumpter) are on the trail of intensifying storm cells approaching the area. Their travels ultimately take them to the small town of Silverton, where a series of massive tornadoes are about to touch down.

Meanwhile, Donnie (Max Deacon) and Trey (Nathan Kress) are teenage brothers living in small town Silverton with their widowed vice principal dad Gary (Richard Armitage), who has the boys making a video time capsule that includes the school’s graduation, which is being held outside despite the bad storm approaching.

After an awkward conversation with fellow student Kaitlyn (Alycia Debnam Carey), Donnie decides to skip graduation and help her with a video project focused on environmental issues at an old chemical plant that has to be completed that day. But as the big storm sends the students scurrying for shelter, Donnie and Kaitlyn get trapped under debris at the abandoned site.

Gary and Trey team up with the storm chasers to rescue Donnie and Kaitlyn then save the students back at the school.

There are also two dim-witted thrill seekers named Donk (Kyle Davis) and Reevis (Jon Reep) who hope to become famous by posting YouTube videos of themselves doing dumb stunts including riding out the storm. The two show up randomly in different scenes and add nothing to the plot.

Into the Storm is a confused action-drama that is more B-movie like Sharknado than summer blockbuster like Twister. Directed by Steven Quale (Final Destination 5), the movie switches back and forth between “found footage” and traditional storytelling. The story by John Swetnam (Step Up: All In) is terrible, the dialog atrocious and the characters flat and underdeveloped. The highlight of the movie is the spectacle brought about by the computer-generated effects artists, depicting enormous swirling tornadoes out to obliterate everything in their paths. But even the CG footage has ridiculous moments like when a cow suddenly appears in a tornado out of nowhere or when airplanes you’d see at a major international airport, not some small town with two streets, swirling in the twister. Even the two knuckleheads get sucked up only to survive. But the most ridiculous scene is when Donnie is pulled out of the pit unconscious and his dad must perform CPR and mouth-to-mouth, only for Donnie to help herd the school students into buses to escape the school as the tornado bears down. Rated PG-13. Opens Aug. 8, 2014.