In a last ditch effort to save his career as a sports agent, J.B. Bernstein concocts a scheme to find baseball’s next great pitching ace. Hoping to find a young cricket pitcher he can turn into a major league baseball star, Bernstein travels to India to produce a reality show competition called The Million Dollar Arm. With the help of a cantankerous but eagle-eyed retired baseball scout he discovers Dinesh and Rinku, two 18-year-old boys who have no idea about playing baseball, yet have a knack for throwing a fastball. Hoping to sign them to major league contracts and make a quick buck, Bernstein brings the boys to America to train. While the Americans are definitely out of their element in India — the boys, who have never left their rural villages — are equally challenged when they come to the States. As the boys learn the finer points of baseball – Bernstein, with the help of his charming friend Brenda — learns valuable life lessons about teamwork, commitment and what it means to be a family. 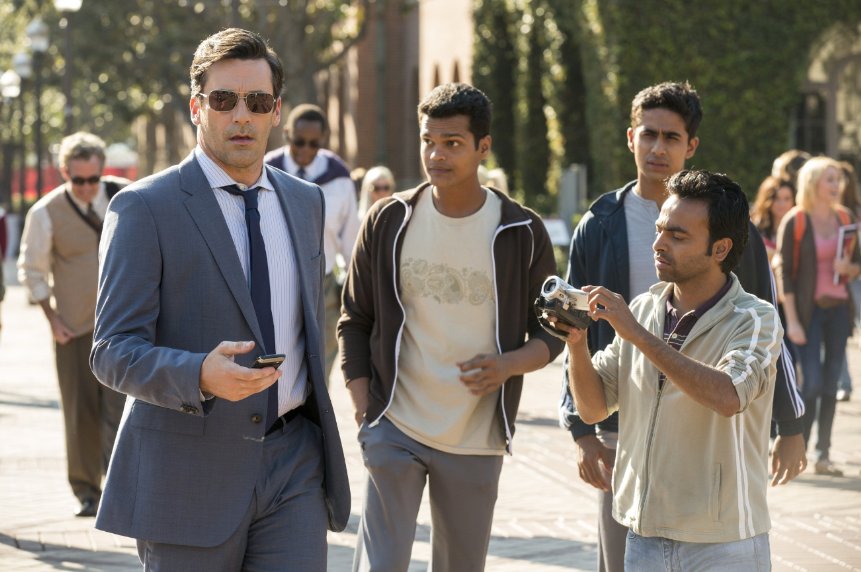 While channel surfing one night, he switches between an Indian cricket match and Susan Boyle singing I Dreamed a Dream on Britain’s Got Talent, and he gets an idea: He’ll stage a contest in India in search of a cricket bowler with enough speed, accuracy and power to become a major league baseball pitcher.

Bernstein launches a $1 million reality TV competition called The Million Dollar Arm to find two players he can bring back to America and train for a major league tryout. He travels to India without Aash, where his local help informs him that preparations are running “on time and smoothly,” concepts that Bernstein soon learns are relative in Mumbai, where negotiations are more apt to take place in a clogged city street with a quiet bribe than with lawyers and contracts.

Soon Bernstein hits the road across the Indian countryside, where he and his grumpy scout, a compulsive napper Ray (Alan Arkin), audition thousands of young men. With prospects looking bleak, two possibilities eventually emerge: Rinku Singh (Suraj Sharma from Life of Pi), a javelin thrower who strikes a yoga-like pose before throwing the ball, and Dinesh Patel (Madhur Mittal from Slumdog Millionaire), whose delivery job with his father pales compared to dreams of success in America. When Bernstein brings the two back for training, their rural Indian upbringings lead to several funny mishaps like fish out of water in the big city – they are particularly intrigued by elevators and pizza delivery, thing they don’t have in their rural Indian villages. They get kicked out of their hotel and move in with Bernstein, cramping his fast bachelor lifestyle.

Bernstein’s face rarely breaks into a smile, his voice a hoarse growl as he briskly tells his charges to work harder and faster, even as they suffer from homesickness and isolation. Luckily, Bernstein brought along baseball fan and aspiring coach Amit (played by Bollywood star Pitobash) as his right-hand man with the boys, although Amit is often caught up in the cultural divide with the boys. Not only is the game itself difficult to master, but life in the U.S. with a committed bachelor makes things even more complicated for all of them.

Luckily, Bernstein has some voices of reason including throwing guru and USC pitching coach Tom House (Bill Paxton) and his beautiful tenant Brenda (Lake Bell), who lives in his carriage house. She helps Bernstein understand what the boys are going through and helps him help them. While Singh and Patel learn the finer points of baseball and American culture, they teach Bernstein the true meaning of teamwork and commitment. Ultimately, what began as a purely commercial venture becomes something more and leads Bernstein to find the one thing he was never looking for at all — a family.

Million Dollar Arm is Jerry Maguire meets Slumdog Millionaire. Except this tale is based on the real-life story first brought to light by sports producers Neil and Michael Mandt. Director Craig Gillespie and screenwriter Tom McCarthy took some liberties in bringing the tale to the big screen. Bernstein’s sports agency wasn’t going under, as in the movie, and his neighbor, tenant, had a different job in real life, for starters. Million Dollar Arm doesn’t break the mold of come-from-behind sports movies — indeed, it obeys every convention of the genre, but it does so with understatement, style and an exceptional group of actors. It is an inspirational, enjoyable, old-fashioned family film. Rinku and Dinesh eventually became the first Indian players in Major League Baseball and signed with the Pittsburgh Pirates. Rated PG. Opens May 16, 2014.