Lupo Verde finally opened at the end of February at 1401 T St. NW after several delays. It is one of the newest editions to the hot 14th Street corridor. 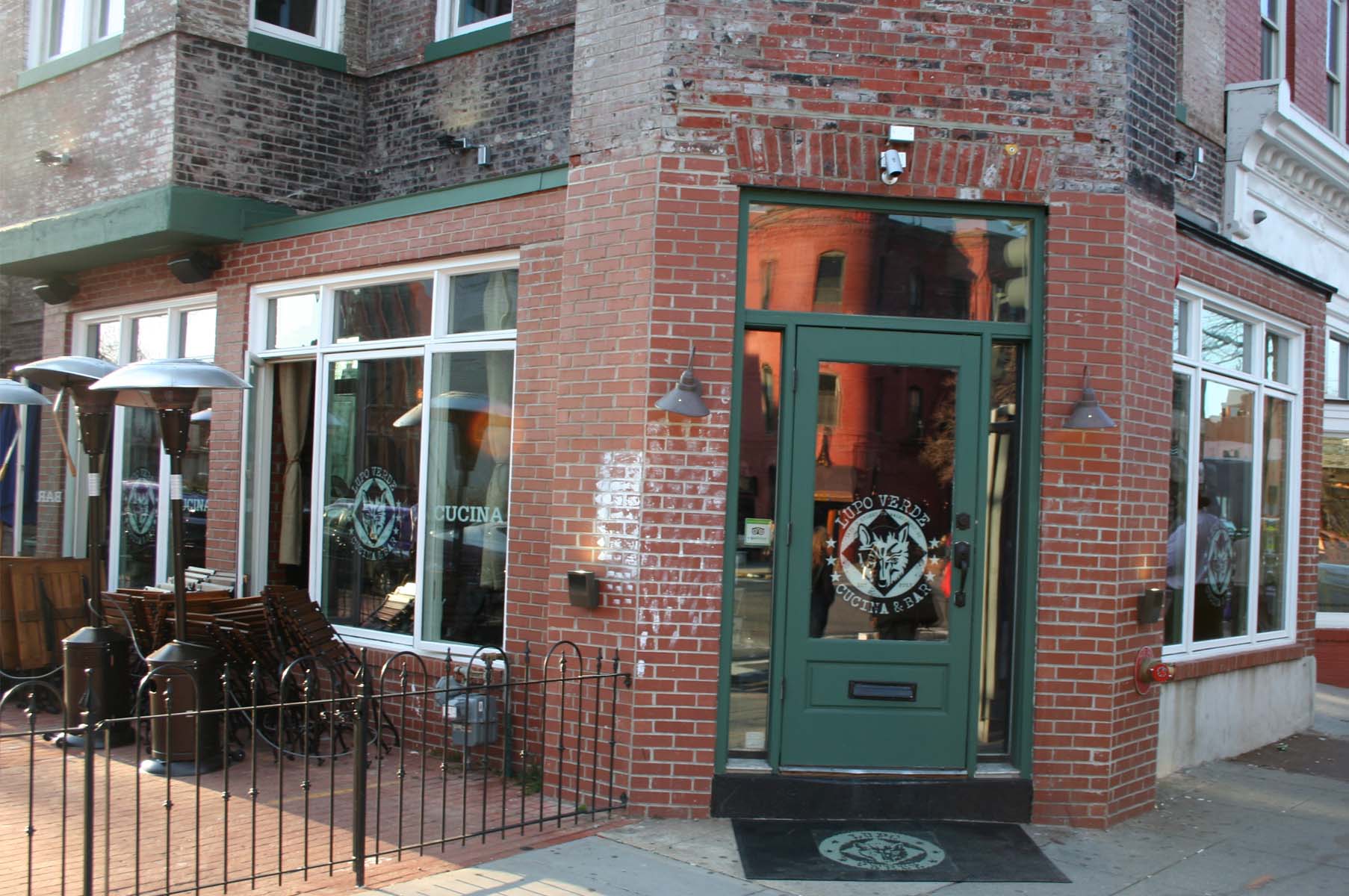 The small 100-seat restaurant is spread over two floor. Designed by Lisa Halloran of Sculptures of Space, the first floor includes a 15-seat bar topped with Carrera marble and covered in hand-painted Italian tiles. There’s also a 25-seat lounge and the cheese shop, which showcases a selection of imported and house-made cheese and salami. The second floor includes high ceilings, floor-to ceiling windows, a 10-seat marble bar and 50 seats including a semi-private alcove and a large round table in the buildings cupola that seats groups up to eight. There’s also a gated patio that seats 40 for outdoor dining during the spring and summer. Both floors have rustic exposed brick, crown and base molding, and distressed wood floors and tables.

Inside Lupo Verde (clockwise from top left) the second floor dining room, the cuppola table, the downstairs bar and dining area and the cheese room. (Photos: Mark Heckathorn/DC on Heels)

The space is tight with tables close to each other. The high ceilings and large windows help to open the space up, but with mostly hard surfaces and only curtains to buffer the sound, the noise level is high and you cannot have a private conversation. You’ll hear your neighbors, and they will hear you. We were seated in the back corner of the second floor, which was fine until a large party was seated in the cupola. With 10-12 diners squeezed into the space, we were jostled by waiters, servers and guests coming and going.

Chef de cuisine Domenico Apollaro moved from Italy to take the position at Lupo Verde. A graduate of culinary school in Italy, Apollaro was the executive chef at Eat’s Easy Restaurante in Milan prior to moving to Washington. He also worked as executive chef at Osteria Vista in Lachen, Zurich and served as the chef of the restaurant at Altri Tempi in Marina di Massa and Lucca, Italy. He previously owned three restaurants in Villapiana, Italy.

Apollaro’s menu features small plates, house-made charcuteries, breads and antipasti along with 50 cheeses, five of which are house made while the others come from local farmers or are imported from Italy. Wood-fired pizza and house-made pastas are served along with whole roasted fish and a selections of meats.

Customers can purchase 70 percent of the menu “to go” including the cheeses sold by the ounce, two house-made prosciuttos and other house-cured meats. The fresh and dried house-made pastas will be available for purchase by the kilo, along with house-made sauces and rustic house-made breads. 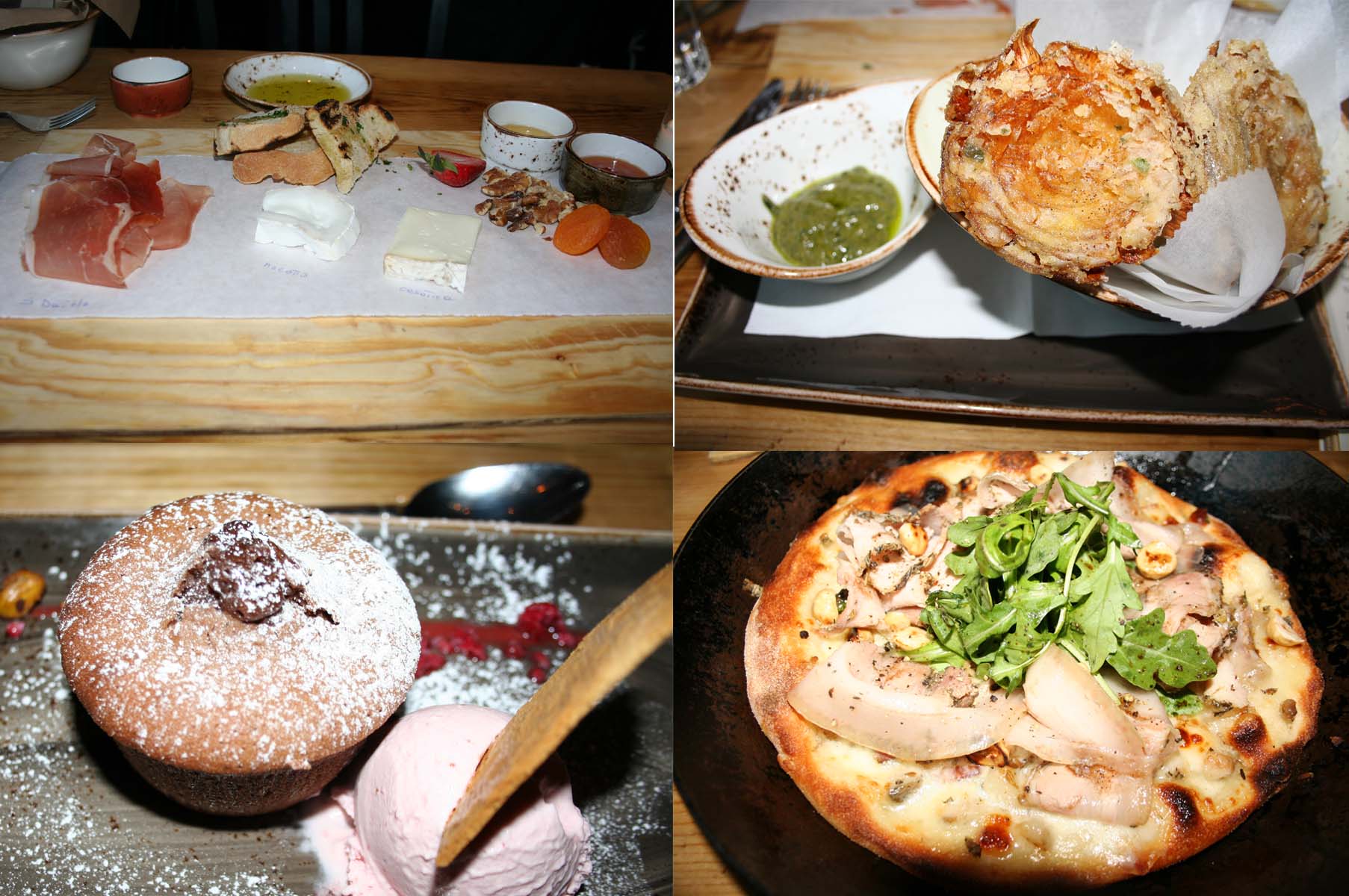 Our waiter recommended we start with a charcuterie board. We selected the prosciutto San Daniele, which had been aged 18 months; the nocetto di capra, a soft goat cheese; and the casatica di bufala, a soft cow’s milk cheese. The meat and cheeses were served on a board covered with butcher paper with the choices labeled, grilled bread, a strawberry, dried apricots, walnuts and two dressings to drizzle on top. Diners can choose any three items for $13 or five items for $18.

For our antipasti, we chose the fried artichokes with salt and pepper, and a dipping sauce. This was the best dish of the night, with the artichokes fall-apart tender and the dipping sauce tasty. Antipasti range from $6-$12. Then we chose the Lupacchiotto pizza with scamorza, mozzarella and taleggio cheeses, porchetta roast port, arugula and hazelnuts. The pizzas are small (four slices) and cost $12.

House-made pastas include pappardelle with a lamb ragu (left) and lasagna. (Photos: Mark Heckathorn/DC on Heels)

For our pasta courses, my dining companion chose the lasagna, which was excellent, made with meatballs, sausage, béchamel sauce, mozzarella and tomato sauce. It was sweet and spicy, rich and creamy. I’d definitely order it again and recommend it to others. I attempted to order the pasticcio with macaroni and a Neapolitan meat ragu in a puff pastry, only to be told it was no longer on the menu. So I ordered the pappardelle with a lamb ragu. It probably wouldn’t be on my order again. The pastas range from $14-$18 and are available gluten free.

We were getting full, so we skipped the second course, which includes salt baked branzino, crispy prawns, baked chicken, lamb stew and a grilled sirloin. They range from $19-$29. Three choices of sides, which cost $5, come separately and include crispy vegetables with capers and mint; crispy zucchini with scrambled eggs and smoked paprika, and pan seared potatoes and dried red peppers.

For dessert, I chose the warm chocolate cake with strawberry-fiordilatte (a type of mozzarella cheese) gelato with raspberry caviar. The gelato was tasty, but the cake a bit dry. Desserts range from $8-$10, with house-made granita priced at $4 and house-made gelati priced at $5.

Lupo Verde is definitely worth a visit, especially for the charcuterie. I just wish the tables weren’t so close together, the servings not so small and a lot of the menu in Italian, so we had to ask our server about many of the items. It is open Sunday-Thursday from 5 p.m.-2 a.m. and Friday-Saturday from 5 p.m.-3 a.m.