Dating in the Leagues

Spring is coming (it really is, I promise!), and it’s time to get active. Why not join a team sport, make friends and maybe find a mate along the way? D.C. is full of different leagues and team sports. From bocce to kickball, there is an activity available for any kind of person. These team activities are a great way to meet different people around D.C. and in these groups, you may end up finding someone to date. 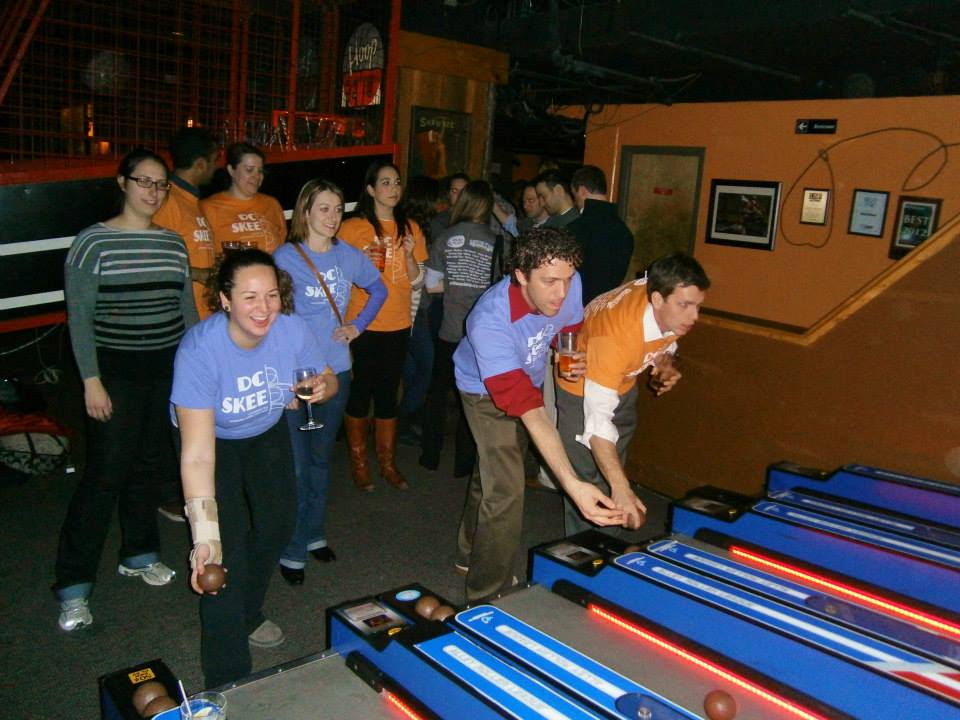 Sports leagues from bocce to kickball to skeeball are a great place to meet your potential mate. (Photo: DC Skee/Facebook)

The D.C. Bocce League is celebrating its 10th anniversary. Established in 2004, the D.C. Bocce League offers games around the city. It offers three different bocce types: Bar Bocce, Glo Bocce and Outdoor Bocce. Spring registration is currently open and games are starting as early as next week. All players must be 21 years or older and meet all requirements as stated on the D.C. Bocce League website. For more information on joining or creating a bocce team, click here.

If traditional bar games are more your style, check out D.C. Skee, a skeeball league that meets in bars around Arlington and at Iron Horse in Chinatown. Leagues are about six to eight weeks with a final championship tournament and end of season party. Weekday games are played between 6-9:30 p.m. This is a great league to join if you are a guy looking for a gal. Players range between 23 and 31 years old and 60 percent are female. You can visit D.C. Skee’s website.

Although skeeball and bocce can be very fun, if you are looking for a more physically active sport, check out D.C. Kickball. These coed teams meet up at the Washington Monument and play a game of kickball. Kickball is not the only component of this league. Post-game, everyone heads over to a nearby bar for food, drinks, flip cup and partying. Similarly to D.C. Skee, D.C. Kickball leagues are also comprised of about 60 percent females. Be sure to check out their homepage here and check out the different divisions. Some of the teams are comprised of like-minded individuals such as D.C. Tech and Startups or LGBTQ divisions.

For those not even remotely interested in sports or physical activity, there are other group options for meeting new people in the city. District Karaoke is a team-based karaoke competition that meets at Irish Channel in Chinatown, Ri Ra Irish Pub in Chinatown, Policy on 14th Street and Acre 121 in Columbia Heights. Each night is comprised of three rounds. In the first and second round, a member of each team sings a solo. In the third round, at least two members sing as a group. To join a District Karaoke team, visit their website.

There are many other groups that meet up in the District. Meetup.com is a great resource for finding groups with people who share similar interests. Groups range from Caribbean music lovers to German language speakers. This will give you a fun platform to meet new people and maybe meet your next love interest. Happy dating, D.C.!