Labor Day centers on 13-year-old Henry Wheeler, who struggles to be the man of his house and care for his reclusive mother Adele while confronting all the pangs of adolescence. On a back-to-school shopping trip, Henry and his mother encounter Frank Chambers, a man both intimidating and clearly in need of help, who convinces them to take him into their home and later is revealed to be an escaped convict. The events of this long Labor Day weekend will shape them for the rest of their lives. 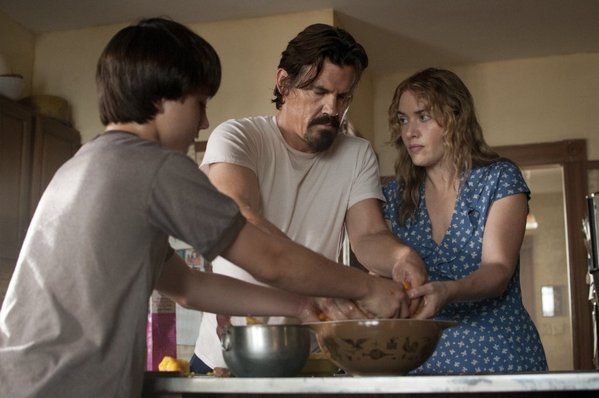 Labor Day is narrated by Tobey Maguire as the adult version of Henry — played as a teen by Gattlin Griffith. Henry recounts his youth as he deals with his mother Adele’s (Kate Winslet) broken heart after several miscarriages and his father Gerald (Clark Gregg) moving on with a new life.

Suffering from horrible agoraphobia and very unsettled emotionally, Adele counts on Henry to be the man of the house, but he’s a few years away from being a man.

On the Friday before Labor Day 1987 in New Hampshire, the two head to Pricemart for some back-to-school shopping where Henry meets up with a bleeding Frank (Josh Brolin) – an escaped convict on the lam. Frank kidnaps the two and forces them to take him to their home where the three spend Labor Day weekend getting to know each other. Frank fixes things up around the house and teaches Henry how to hit a baseball. The two adults fall in love when they’re not cleaning the house, barbequing or baking pies.

The big scene is when a neighbor checks on Adele and Henry and drops off some ripe peaches. For 10 minutes, Frank shows the mother and son how to bake a pie. Shots of him cutting peaches. The three of them kneading the dough. Every step is explained and demonstrated. The Food Network doesn’t spend that much time showing you how to bake a pie. It also eludes to a sense of eroticism — it is a peach pie after all — but Henry is right in the middle of the process only making it even more awkward.

After Henry starts talking to schoolmate Eleanor (Brighid Fleming), he starts to question Frank and Adele’s motives when they begin asking for books from the library about Canada and Prince Edward Island.

Director/writer Jason Reitman (based on the book by Joyce Maynard) has plenty of trouble with the narrative. Constant flashbacks reveal the story behind why Frank was incarcerated and why Adele has such a hard time coping with life. The back story may gain Frank some sympathy with the audience, but Adele and Henry don’t seem to get that, which makes it appear like Frank wins over Adele because he looks like Josh Brolin and makes a tasty peach pie. Not exactly good reasons to vote her Mother of the Year as Frank becomes some sort of surrogate father for Henry and Adele’s daddy (if you know what I mean).

All the big reveals do are enhance the story’s downbeat tone and this is not a feel-good movie. It’s a huge downer.

Labor Day is author Joyce Maynard’s masturbatory fantasy about a big hunky escaped con hiding in a lonely but sexy single mother’s house for a long weekend and becoming the perfect lover, father and handyman. Labor Day will definitely remain one of 2014’s dullest films. The movie has a ridiculous, moronic, preposterous plot. She’s a depressed mom and he’s your standard convicted murderer with a heart of gold. So naturally they click. What morose woman wouldn’t fall in love with a killer on the lam and vice versa? Spare yourself. Take the money, go to the grocery store and buy a pie. Rated PG-13. Opens Jan. 31, 2014.