Santa delivered five new nationwide releases on Christmas Day, but by the weekend audiences had turned their attention back to blockbuster holdovers The Hobbit: The Desolation of Smaug and Frozen. With a diverse set of options, overall business was strong on the final weekend of 2013: the Top 12 earned $185.8 million, which is up 13 percent from the same frame last year. 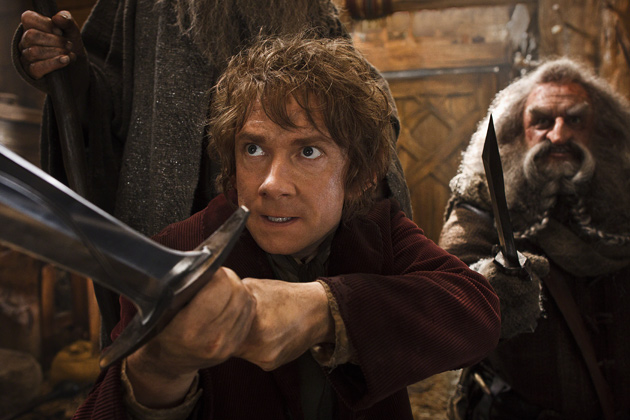 Martin Freeman as Bilbo Baggins in The Hobbit: The Desolation of Smaug. (Photo: Warner Bros.)

The second Hobbit movie took first place for the third-straight weekend — the only other movie to accomplish this in 2013 was fellow Warner Bros. release Gravity. The Hobbit added $29.04 million. The Desolation of Smaug has now earned more than $189 million, and remains on pace for a final take of $250 million.

Disney Animation’s Frozen continued to exceed even the most optimistic expectations. The animated sensation increased 47 percent to $28.60 million. The movie is benefiting not only from great word-of-mouth, but also from a void of legitimate family entertainment — Saving Mr. Banks turned out to be too mature, while Walking with Dinosaurs never really clicked with audiences. Among 2013 releases, Frozen now ranks seventh with $248.12 million. It is now guaranteed to close with over $300 million.

Anchorman 2: The Legend Continues took third place with $19.66 million. Through 12 days, the comedy sequel has earned $83.18 million, and it will pass the original movie’s $85.3 million total in a day or two. David O. Russell’s American Hustle held on to fourth place with $18.70 million. So far, the star-studded 70s caper has earned $59.19 million; with plenty of awards recognition still to come, it should have no problem getting to $100 million.

Among the Christmas Day releases, Martin Scorsese’s The Wolf of Wall Street led the pack with $18.36 million ($34.1 million five-day). It is expected that he movie will burn out quickly, though the controversy about the movie’s borderline pornographic content could spur some interest. If Wolf also garners a handful of Oscar nominations, it could theoretically flirt with $100 million before the end of its run.

After a slow start its opening weekend, Saving Mr. Banks saved some face last weekend by improving 44 percent to $13.45 million. Through 10 days, Banks has earned a decent $37.28 million. The Secret Life of Walter Mitty opened in seventh place with $12.77 million ($25.37 million five-day). For star Ben Stiller, that’s miles away from movies like Night at the Museum and the Meet the Parents sequels. It should play well through the next few weeks.

The Hunger Games: Catching Fire has now earned $390.99 million. With another week of holidays, it appears to be on pace to top the original Hunger Games ($408 million).

A handful of new releases bombed pretty hard last weekend. Universal’s long-delayed mega-budget samurai movie 47 Ronin earned just $9.91 million ($20.61 million five-day). Ronin isn’t doing particularly well overseas either, and Universal is expected to lose a ton of money on this (some reports have it as high as $175 million). Don’t cry for Universal, though—to this point, they’ve had a banner year thanks to major hits like Despicable Me 2 and Fast & Furious 6. Grudge Match was the biggest surprise of the weekend — and not in a good way. The Robert DeNiro/Sylvester Stallone boxing comedy took in just $7.02 million ($13.14 million five-day), which caps a rough year for the two geriatric stars. Audiences clearly weren’t interested in seeing a reheated version of Rocky and Raging Bull.