A Los Angeles judge on Wednesday ordered troubled singer Chris Brown to return to anger management rehab for three months, do at least 24 hours of community service a week and be tested for drugs. This comes after Brown was recently kicked out of a rehab center for throwing a rock through the window of his mom’s car. Brown is also due to appear in court on Monday in Washington following his arrest on charges that he punched a man.

Brown’s representative Nicole Perna said last week that the 24-year-old left a Malibu rehab facility after 16 days and would continue treatment for anger issues as an outpatient in Los Angeles.

However, a letter from the treatment center revealed that Brown got kicked out after he threw a rock through his mom’s car window. The short-fused singer lost his temper Nov. 10 during a family therapy session in which his mother disagreed with his plans to shorten his stay due to limited phone access.

“Mr. Brown proceeded to walk outside and pick up a rock and threw it through his mother’s car window and shattered it,” the redacted letter filed with the court said. “We discharged him from residential treatment and told him he could leave immediately as he had signed a non-violent contract when he enrolled.”

Brown was in a Los Angeles courtroom Wednesday and listened quietly as Judge James Brandlin who is overseeing his Rihanna assault probation ordered him to get more help. Brandlin ordered Brown to complete another 90 days of residential rehab and submit to periodic drug testing. The judge said Brown must stay in Los Angeles County during the treatment and serve 24 hours per week of community labor.

The singer also was ordered to take any medications prescribed by his doctors and return to court Dec. 16. 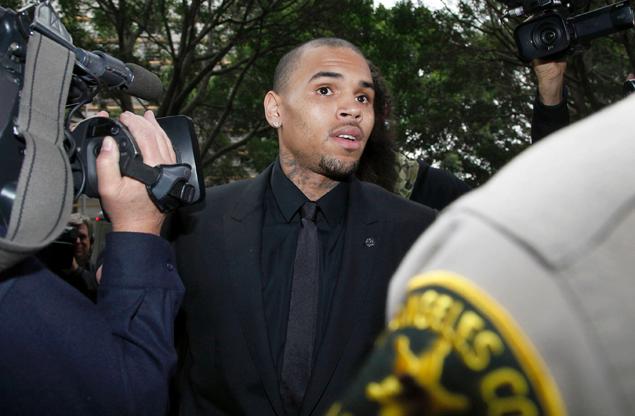 Prosecutors did not seek immediate jail time, rather they asked for a supplemental report on Brown’s recent assault arrest around 4:30 a.m. on Oct. 27 outside the W Hotel at 15th Street and Pennsylvania Avenue NW after he punched a man who wanted his autograph. The singer pleaded not guilty and faces up to 180 days in jail if convicted.

Brown allegedly broke the man’s nose. The singer had thrown a party at The Park nightclub near 14th and I Streets NW that evening.

The judge granted the request. Brown answered “yes” when Brandlin asked if he accepted the new terms.

His lawyer said the treatment was for anger management. The letter from the treatment center said Brown had “dual diagnosis” issues, but did not elaborate. The Los Angeles County Probation Department recommended the 90 days of additional rehab saying Brown had some success during his initial 13 days of treatment.

In a probation report obtained by The Daily News, Brown’s officer stated that the R&B star had issues with attention deficit disorder and “underwent a period of depression” when he was given an additional 1,000 hours of community labor in August following claims he mis-reported hours completed in his home state of Virginia. The probation report said Brown started his new community labor shortly after his rehab release and recommended further treatment – not jail.

The Deputy District Attorney said her side was reserving its right to seek a probation violation after seeing the supplemental D.C. report.

If the LA judge finds his recent actions violated his Rihanna probation, Brown could get new time behind bars.

Brown’s troubles are part of a long string of allegations. He allegedly destroyed property during a backstage brouhaha on the set of ABC’s Good Morning America in 2011 and was implicated in the bottle-throwing nightclub brawl with rapper Drake last year in Manhattan. Last January, Brown clashed with singer Frank Ocean at a recording studio in West Hollywood, and Ocean later complained of an injury on Twitter.

After his arraignment here in D.C. on Oct. 28, Brown returned to California, met with his probation officer and entered rehab. His lawyer said his voluntary rehab stay was not an “an admission” of any wrongdoing in D.C.