The former Kate Middleton gave birth to her and Prince William’s first child, a son, on at 4:28 p.m. London time Monday at St. Mary’s Hospital in central London. She gave birth in a private wing of the hospital where Princess Dianna also gave birth to the new dad.

The birth was announced via a formal press release issued by Kensington Palace, which stated that the duchess “was safely delivered of a son” at 4:24 p.m., local time, weighing 8 lbs., 6 oz. The couple had made their way to the hospital about 6 a.m., local time, in the early stages of labor. 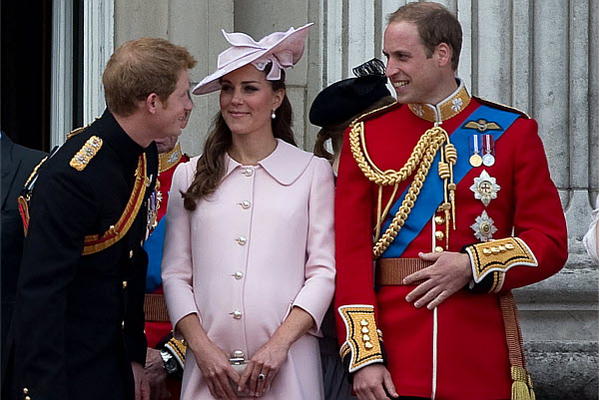 Kate Middleton shares a joke with her husband Prince William (r) and Prince Harry after the Trooping the Colour ceremony in June. It was one of her last public appearance before having her baby. (Paul Hacket/Reuters)

“The Duke of Cambridge was present for the birth,” the statement added. “The Queen, The Duke of Edinburgh, The Prince of Wales, The Duchess of Cornwall, Prince Harry and members of both families have been informed and are delighted with the news.”

Mother and son are both doing well, the palace said, and will remain in the hospital overnight.

Now third in line for the throne

The new baby — the first for William and Kate, who married in 2011 after a long courtship — will be third in line to the British throne, behind Prince Charles and William. William is second in line, right behind his father, Prince Charles. The baby moves ahead of Prince Harry, who’s now fourth in line.

“We could not be happier,” Prince William said via a palace spokesperson. He was spending the night at the hospital with his wife and new baby.

William was reportedly with the duchess throughout her labor, and called the queen, Prince Charles, Prince Harry and the Middletons with the news.

A bulletin containing details of the birth was taken by car to Buckingham Palace and placed on an easel at the palace gates for the public to see. Initially, officials had planned to place the bulletin on the easel before issuing the news electronically, but changed course shortly before the birth was announced.

The baby’s name has not been announced yet, but speculation is that he will be named either James or George. He will officially be known as His Royal Highness Prince [Name] of Cambridge.

The title follows the dukedom bestowed on William by his grandmother, Queen Elizabeth II, on his wedding day in 2011. Earlier this year, the queen issued a royal decree allowing this royal baby — and all of William and Kate’s children — to be titled prince or princess. The decree said “that all the children of the eldest son of the Prince of Wales should have and enjoy the style, title and attribute of royal highness with the titular dignity of Prince or Princess prefixed to their Christian names or with such other titles of honour.”