Since Dom and Brian’s last heist in Rio toppled a kingpin’s empire and left their crew with $100 million, our heroes have scattered across the globe. But their inability to go home and living on the run have left their lives incomplete. Meanwhile, Hobbs has been chasing an lethally skilled mercenary drivers, whose mastermind is aided by a ruthless second-in-command revealed to be Dom’s dead girlfriend, Letty, who was thought to be dead. The only way to stop the group is to outmatch them at street level, so Hobbs asks Dom to reassemble his elite team in London. Payment? Full pardons for all. 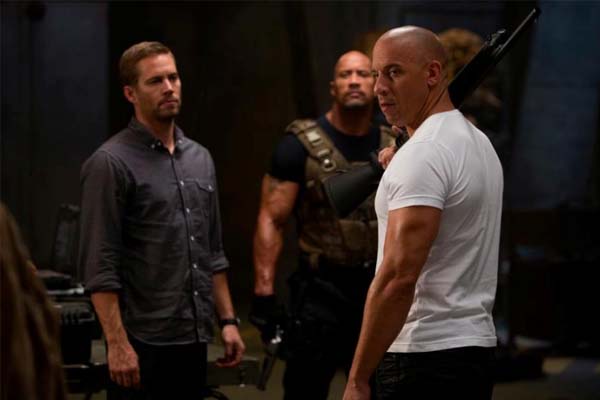 Letty is back and on the other team

But their bliss ends when federal agent Luke Hobbs (Dwayne Johnson) shows up with an offer the two men can’t refuse; Hobbs needs their help in taking down international criminal Owen Shaw (Luke Evans). The fact that one of Shaw’s crew appears to be Dom’s old girlfriend Letty (Michelle Rodriguez) — thought to have been killed two movies ago in Fast & Furious — compels the hot-rodders out of retirement to rescue her.

Nabbing Shaw means putting the band back together, so Tej (Ludacris), Han (Sung Kang), Gisele (Gal Gadot) and Roman (Tyrese Gibson) are all called in from their exiles.

The premise is that Shaw wants to steal stealing a component for a dirty bomb he plans to sell to terrorists. But what Fast & Furious 6 is really about is driving really fast through Picadilly Circus and Trafalgar Square and zipping along Spanish expressways while being shot at by a tank. And Lin and his team do an extraordinary job of staging the ever-escalating action sequences, up to a jaw-on-the-floor finale involving various four-wheel vehicles in and around a cargo plane that’s trying to take off.

Will there be a Fast & Furious 7? Who knows, but the closing credits leave that opening.

It’s no more sophisticated than previous entries, but thanks to a higher-octane sense of humor and some typically terrific set pieces, Fast & Furious 6 offers another enjoyable ride for fans of the franchise. Rated PG-13. Opens May 24, 2013