What Red Heels Mean in the U.K. and Other Signals of Style

Last week I went to the Black and White Affair party at a club on U Street. Fashion-wise, I suppose it was as interesting as any black and white party could be. There were black dresses, white blazers, stripes, sequins and those who didn’t bother observing the dress code at all. But what ended up being most memorable that night was unexpectedly not the fashion, but a British man’s commentary on it.

Standing around, observing the crowd, I got into conversation with a photographer from the U.K. who has made D.C. his home. Our small talk and pleasantries suddenly took a more interesting turn when he leaned in and asked me what I thought about a particular woman there wearing red heels. I looked at her. Standard black and white outfit, red shoes. Nothing remarkable. I turned back to the photographer and shrugged, “I don’t think much of her.” The questioning look on my face prompted an explanation. 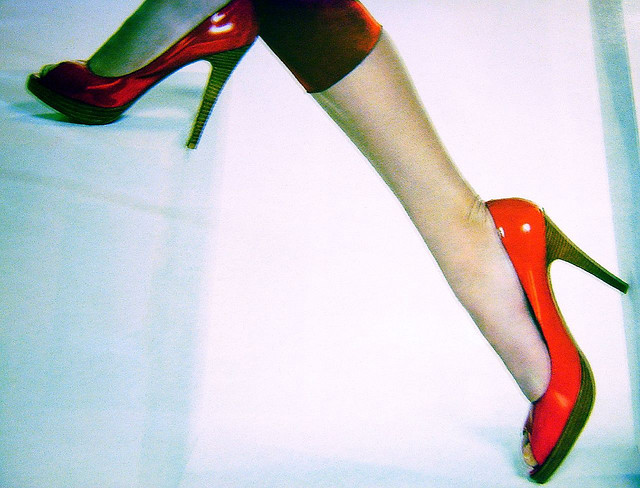 What do your shoes say about you? (Photo Credit: d u y g u)

“Well, I don’t know if it’s an unwritten rule in the U.S., but in the U.K., when a woman wears red shoes it’s a signal that…” he chuckled, “she’s not wearing any panties.” I couldn’t help but laugh. Laugh at the awesome absurdity of a “red heel” convention, and also at the fact that we were probably both standing there truly wondering whether this unremarkable woman had knickers on underneath. Great icebreaker.

But now I was intrigued to learn more about this foreigner’s take on life and style in Washington, D.C. I asked him a few questions and was actually rewarded with an insightful conversation. First, he loves the city; he thinks it’s great. Its style, though, is another matter. He lamented that sometimes D.C. seems void of style; it’s got no swagger, no panache. Much like the room we were standing in, everyone is dressed nicely but lacks individuality; or they otherwise don’t know how to express individuality through their appearance.

Granted, we were at a black and white party, and although many people didn’t bother following the dress code, we were mostly in a sea of different variations of the same black and white outfit. The photographer pointed to one outfit he thought stood out from the rest. It belonged to a man wearing a red patterned shirt with small black and white details and black slacks. I admitted the man looked cool, he owned his look. He looked like a person who would have something interesting to say. He had style. The photographer gave me the example of other successful style bearers: the Italians. “In Italy, you can meet a man and he’ll be wearing old, cruddy clothes, but with his air — the way he carries himself — can make himself look dashing. That’s style.” 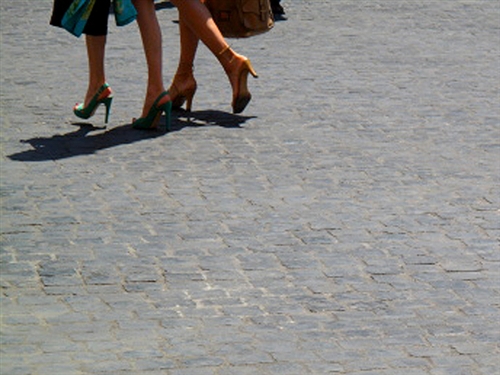 Walking the city streets in heels is no easy feat! (Photo Credit: MSNBC)

Or take the businesswomen and politically engaged women walking downtown. “They’ll be in these stunning suits, and you think they look beautiful. But then you look down … and see they’re wearing trainers!” And it’s not only that. “Many women in this city who do wear heels don’t even know how to properly walk in them. They walk like this.” And he demonstrated for me an accurate depiction of a woman painfully walking in the discomfort of her heels.

Now, I often see and know many women who wear sneakers with their suits, and women who awkwardly walk with bent knees in obvious pain from their shoes, but I had to partially come to their defense. I sympathize with my fellow heel-wearing city girls! Walking the city streets, full of potholes, cracks and grates is no easy feat in stilettos or even a simple, modest heel. Walking up hills and down hills, from the metro, to coffee, to lunch, it takes a toll on our toes!

His rebuttal: “If Italian women can do it on cobbled streets laid by the Romans…”

Yeah, yeah. We get it. The Italians are fabulous. What’s new?