When the White House (Secret Service code name Olympus) is captured by terrorists and the president is kidnapped, a disgraced former presidential bodyguard finds himself with the country’s future on his shoulders. As the national security team scrambles to respond, they are forced to rely on the bodyguard’s inside knowledge to help retake the White House, save the president and avert an even bigger crisis. 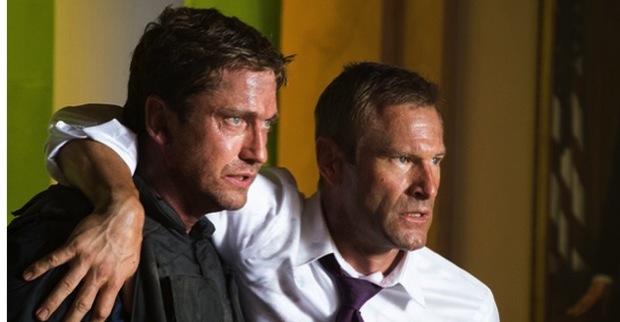 Mike Banning (Gerard Butler) is President Benjamin Asher’s (Aaron Eckhart) lead bodyguard, confidant, boxing partner and family friend. After a tragic accident in which the first lady (Ashley Judd) is killed, Banning is demoted and assigned to desk duty at the Treasury Department. But when the South Korean foreign minister visits the president, his supposed bodyguards and North Korean sympathizers capture the White House, kill the foreign minister and take the U.S. leaders hostage, Banning finds himself with a chance to make things right.

After the president, vice president, Secretary of Defense Ruth McMillan (Melissa Leo) and others are taken hostage, Congressman Allan Trumbull (Morgan Freeman), the seasoned Speaker of the House, assumes command. A veteran politician, he unflinchingly makes even the most difficult decisions when it comes to protecting the country.

Lynne Jacobs (Angela Basset) is the steely, strict and tough director of the Secret Service. As part of the security team working to save the president during the crisis, she convinces the others to put their trust in Banning.

The leader of the takeover is Kang (Rick Yune). As an aide to the Korean foreign minister, he appears to be unassuming with the quiet demeanor of an accountant — but beneath his reserve lays the heart of a cold-blooded killer whose only goal is to bring the United States of America to its knees. He’s assisted by Agent Forbes (Dylan McDermott), a former colleague of Banning’s who was present the night the first lady died. He has since retired from the Secret Service and now works private security.

Despite all of the security, Secret Service and others, the terrorists are able to take control of the White House in 13 minutes. Yet is takes the military 15 minutes to arrive. But Banning is able to make his way from the Treasury building to the White House, while single-handedly killing many of the terrorists, walks right into the building, gets into the Oval Office, obtains the president’s secured satellite phone and gets his son out to safety. He’s also able to blow up a U.S. prototype weapon being used against the military trying to take back the White House, override the surveillance system in the building, shut down a system set to detonate all U.S. nuclear missiles in their storage silos leaving the U.S. a barren waste land, kill Forbes, rescue the president and kill Kang, then walk the president out of the demolished White House to waiting medical personal.

How many heals does it get?

I find it hard to believe that terrorists would be able to steal an Air Force fighter plane and fly it to the White House. As D.C. residents, we all know it would be shot down long before it reaches the city’s airspace. It is also unbelievable that the president would take the Korean prime minister and his party into the bunker, despite warnings from Secret Service that it was against protocol. And surely Banning’s security access would have been erased after he was reassigned and combinations changed.

Also, the Korean that the terrorists speak is second rate. I was with a native speaker who laughed throughout the movie. He said that while technically correct, the pronunciation was similar to the Spanish that someone who was born and never left the Midwest would speak. I guess the budget didn’t include a speech coach. Finally, I found myself routing for the terrorists to kill the Secretary of Defense character, who cried, begged, and showed no qualities that would qualify her to lead the U.S. military forces. Rated R. Opens March 22, 2013