60 Free Tickets to the advanced screening of “The Lucky One”

Guess what?  Your’e  in luck! DC On Heels is giving away 60 movie tickets (30 pairs) to go and see the new romantic drama “The Lucky One.”  Zac Efron stars with Taylor Schilling and Blythe Danner in this romantic drama  directed by Academy Award®-nominated writer/director Scott Hicks (“Shine”), based on Nicholas Sparks’ bestseller The Lucky One. (The same acclaimed author who wrote “The Notebook”) So you know it’s going to be good!!! 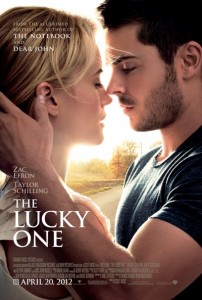 Here are the deets to go and see a special advanced screening of the movie:

For your complimentary tickets to an advance screening of THE LUCKY ONE in Washington, DC on Monday, April 16 log onto www.gofobo.com/rsvp and input the following code: DCHEELVUYJ to download your tickets.

You will be allowed to download two (2) tickets to the screening.  *As a reminder, screening tickets do not guarantee admittance.  Seating is first come, first serve.

In Theaters May 11th.

Zac Efron stars with Taylor Schilling and Blythe Danner in the romantic drama “The Lucky One,” directed by Academy Award®-nominated writer/director Scott Hicks (“Shine”), based on Nicholas Sparks’ bestseller The Lucky One.

U.S. Marine Sergeant Logan Thibault (Efron) returns from his third tour of duty in Iraq, with the one thing he credits with keeping him alive—a photograph he found of a woman he doesn’t even know.  Discovering her name is Beth (Schilling) and where she lives, he shows up at her door, and ends up taking a job at her family-run local kennel.  Despite her initial mistrust and the complications in her life, a romance develops between them, giving Logan hope that Beth could be much more than his good luck charm.

In Theaters May 11, so be the first to see this special advanced screening of the film and tell us what you think! Leave a comment on our Facebook page or Tweet us!

Shop Amazon Clothing – Up to 40 Off Dresses