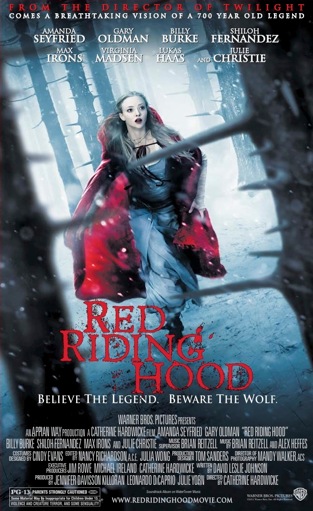 DC ON HEELS is teaming up with Warner Bros. Pictures and guess what?

We have 40 ‘admit one’ tickets for the new  complimentary tickets to a special advance screening of RED RIDING HOOD at AMC Couthouse. Log onto www.gofobo.com/rsvp and input the following code:DCHEELC4B2 to download your tickets. In Theaters Friday, March 11.

Red Riding Hood is an upcoming American horror film directed by Catherine Hardwicke, produced by Leonardo DiCaprio from a screenplay by David Leslie Johnson, the writer of Orphan. It is very loosely based on the folk tale Little Red Riding Hood.

The film is set in the medieval village of Daggerhorn, where a young woman named Valerie (Amanda Seyfried)plans to run away with her woodcutter lover, an outsider named Peter Shiloh Fernandez , in order to avoid marriage with Henry Lazar (Max Irons), with whom her parents have arranged to marry, so that they can repay their debts to Henry’s wealthy father. Their plan to run off with each other is forestalled when Valerie’s older sister is found slaughtered by the mysterious werewolf that has been terrorizing their village for years. The people of Daggerhorn have maintained an uneasy truce with the beast, offering the creature a monthly animal sacrifice. But under a blood-red moon, the werewolf has upped the stakes by taking a human life. Hungry for revenge, the people summon a famed Witchfinder General, Father Solomon (Gary Oldman), to help them track down and kill the beast. But Solomon’s arrival brings unintended consequences, as he warns that the werewolf, who takes human form by day, could be any of them.  As the death toll rises with each moon and panic grips the town, Valerie discovers she has a unique connection to the beast – one that inexorably draws them together, making her both suspect and bait.